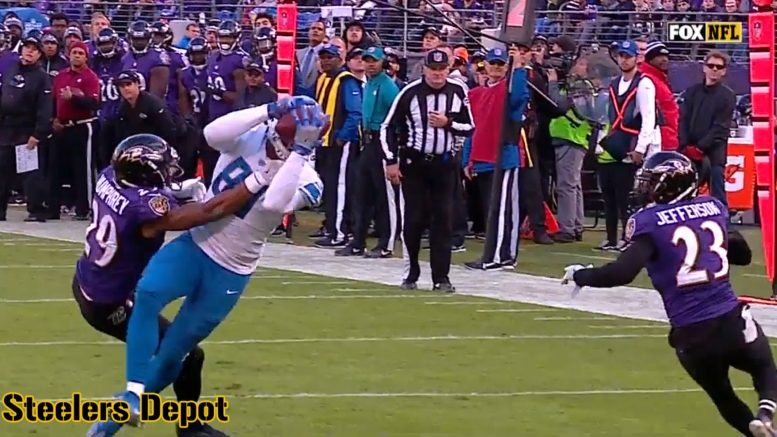 Just last week, the Baltimore Ravens lost their best cornerback, Jimmy Smith, to a torn Achilles, which is an injury that he had already been battling for several weeks—an Achilles injury, not a tear, of course. He had already been given a number of days off from practice to lighten his load on the injury, but, like Richard Sherman, the wear ultimately led to a tear.

It’s a good thing, then, that the Ravens just drafted a cornerback in the first round, plugging in rookie Marlon Humphrey into the starting lineup. And the Alabama product is fully expecting Ben Roethlisberger and the Pittsburgh Steelers offense to go after him a lot during tonight’s game.

After taking over Smith’s starting spot during the game last week, Humphrey allowed five receptions for over 100 yards, including two deep receptions against Marvin Jones, formerly with the Bengals, now with the Lions.

The 21-year-old spoke to the team’s official website as he was preparing to make the first start of his career on the outside. While he wasn’t sure if he was excited about the prospect—“I’ll get more excited as the clock ticks”—but he did know what to expect.

“I’m sure if there’s a weak link they have to pick out, it would definitely be me”, he said. “Ben likes to throw it up, he’s a great quarterback, so I’m sure if he has to take those shots, it will probably be at me”.

In spite of what some may care to believe, the offense has gotten better at hitting on those deep targets lately, although a fair bit of that success was actually thanks to JuJu Smith-Schuster’s contributions in that area, and he is suspended for this game. Martavis Bryant had a drop on a deep pass in the last game, but also drew a pass interference call. Antonio Brown also drew pass interference on a deep target, both penalties against Dre Kirkpatrick.

While he gave up the yardage last week, he also came up with the game-clinching interception at the end to preserve the Ravens’ win and keep them, distantly, in the hunt for the division title. Their best shot to move is now, winning tonight and hoping the Patriots can knock off another loss next week.

Head coach John Harbaugh was supportive of his young starter, saying that anybody who plays that position is “going to have moments where [the opposing offense will] make a play”. And he said that “Marlon seems like he has a good understanding of that. He plays hard, he plays focused, he’s developing his technique and things like that. He’s a very talented guy. I’m looking forward to seeing how he does”.

As do the Steelers, who could also be starting a rookie for the first time in their third-round pick, Cameron Sutton. Whereas he will have to contend with Mike Wallace and Jeremy Maclin, Humphrey will have to deal with Antonio Brown and Martavis Bryant.