First, before going into my rant, I must say the Pittsburgh Steelers played their hearts out. This was an exciting game with some big plays made by both teams. The shot of Ryan Shazier at the stadium was electrifying. The energy from Heinz Field reached out and zapped me all the way in Derwood, Maryland watching the game at my Steelers Bar, the Outta the Way Café. Shalieve!

Instead, this game was decided by two plays. The first was a catch by Jesse James that was ruled a touchdown by the referees on the field but overturned by NFL officials in New York City. The second was a Duron Harmon interception that was not overturned since the officials deemed no holding or pass interference occurred when Eli Rogers tried to catch the call in the end zone.

Watch the Jesse James play in this Steelers Depot article.

Head Referee Tony Corrente explained the reasoning for the catch not being a catch in a pool report:

Referee explanations are supposed to clarify the rules to justify ultimate call and educate the fans who may not be familiar with the rulebook. So, let’s parse this explanation to see if it makes sense to the average fan. First, it appears that there are at least two different sets of rules for catches. One set for regular play and another set “… inside of two minutes….” That does not make sense to this average fan.

The explanation further states that “… a receiver must survive going to the ground.” When a runner is contacted by an opponent and touches the ground with any part of his body other than his hands or feet; the ball is dead the instant the runner touches the ground. However, if he is not touched then he can continue advancing the ball.

Now, look at this play and compare it to the Jesse James touchdown:

Now we go to the penultimate play of the game. Darrius Heyward-Bey catches the ball but is tackled in bounds. Clock ticking, and Steelers go for win instead of spiking the ball. I am good with that. Ben Roethlisberger fakes the spike and goes for Eli Rogers where it appears that contact is made while the ball is in the air. A push from behind. It tips up and is intercepted. No flag. No review. Yet I thought all turnovers under two minutes were supposed to be reviewed. Did the NFL change the rules again?

Here is screenshot of ball in air; push to Eli’s back: 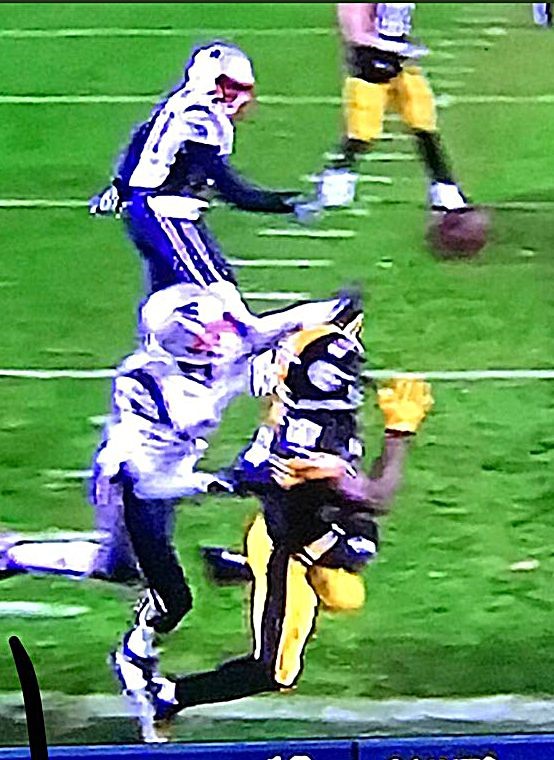 Of course, it may not matter, since a penalty not called is not reviewable as has been explained to me by referees before. So, a play resulting in a touchdown is worthy of review and overturn by officials in New York; but an interception in the end zone two plays later is not. Even if it was, and Eli Rogers was pushed in the back while the ball was in the air the call cannot be reversed. Rewarding an illegal play while punishing a football act of reaching the ball over the end zone does not make sense to the average fan. It just appears to be another application of nonsensical rules. Yet another reason that I call the NFL a sham but remain a Pittsburgh Steelers fan.

Mike Tomlin, who has done a masterful coaching job in my opinion, is on the competition committee. I point blame at him for tolerating such cryptic rules that change each year leaving the average fan and even experts like Tony Dungy shaking their head. The rules need to be simplified so that the average fan does not need video explanations of different sets of rules for what constitutes a catch. The NFL has taken the poetry of motion out of the game and blinded us with the pseudoscience of instant replay.  Maybe Thomas Dolby should be named to head the officiating crews in New York – NFL Blinded Me with Science

Now on the positive side. This was just a regular season game. The Steelers are getting banged up but should be able to win the next two games. Antonio Brown is a huge loss. James Conner hurt is MCL and will likely miss time. Ben was banged up. Hopefully not too many more injuries. Vance McDonald, Joe Haden and Marcus Gilbert should be returning. Martavis Bryant put a nice game together. Hopefully, this will be enough to win the next two games. I have a few more hours to brood on the NFL officials intervening on the outcome of this game and ready to move on to the Houston Texans.

I did not attend this game in person since I donated my tickets to raise money for a rugby scholarship at my alma mater: California University of Pennsylvania. A waitress (or server for the snowflakes), Vicky Robles at the Outta the Way Café won and made her first trip to a Pittsburgh Steelers game from Maryland.

Here is Vicky’s reaction: “I made over 60,000 new friends, danced in the rain, cheered for the Steelers, booed Tom Brady, took about 100 pictures, and was quickly reminded of all the reasons I love this game.  Full disclosure, my husband and I are Dallas fans, but I could not have been happier for my first live game to be at Heinz field.  An amazingly intense and hard-fought game with the extremely bizarre twist at the end! I am completely in love with Steeler’s Fans.  The towels, the shouts, the high-fives, the dancing, were everything football is meant to be, highs, lows, passion, drama, riding the flood of emotions in every second shared with so many!  I’m not ready to trade in my Cowboys, but I sure do love Sunday nights with Steeler’s fans!”