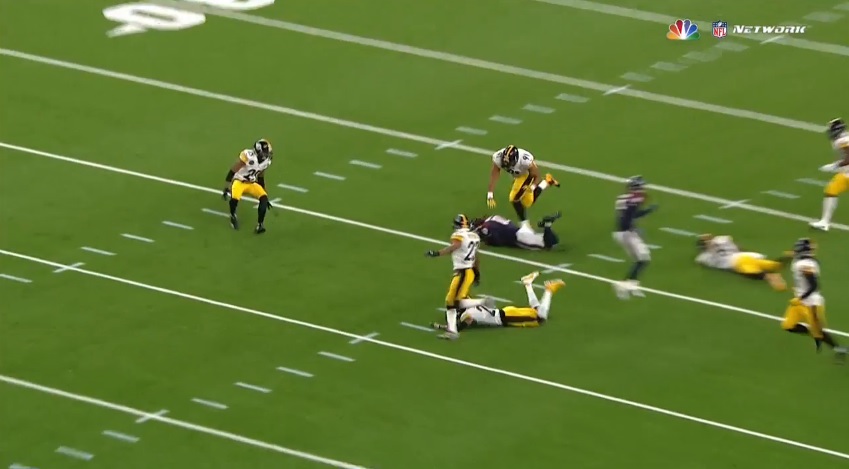 Posted this clip on Twitter last night but wanted to share it on here because it might seem small, but it’s a play that shows the philosophy of being a Pittsburgh Steeler. Especially a Steelers’ defensive linemen. John Mitchell knows what he needs from a defensive linemen and at the top sits effort.

Monday afternoon against Houston, Stephon Tuitt showed what that means. It’s a 27-0 game, late third quarter. The game is over. But Tuitt’s effort remained the same. Watch him chase down DeAndre Hopkins and nearly tackle him after a 38 yard gain.

Immediately after seeing Hopkins make the catch, Tuitt hit full speed and nearly makes the play. That’s him sprinting a good 35 yards, not knowing if he was actually going to make the play.

There was no thinking. It was all instinct. And it goes back to Mitchell’s teachings of running to the ball. Ingrained by the longtime coach but also passed down from the guys before Tuitt, like Aaron Smith or Brett Keisel.

Tuitt and Cam Heyward have two of the best motors in the game. And like those before them, they’ve passed that mentality along to Javon Hargrave. Hargrave didn’t have a great motor coming out of college. One of the first things Mitchell said about his game is that he needed to run to the ball. Now Hargrave runs as hard as those guys.

That’s coaching in action. Take one of your core beliefs, find players who mesh with those values, and make it a requirement to play. Look at the Steelers’ defensive line and you’ll find a group full of guys who run to the ball. Tuitt and Heyward are obvious. Hargrave has made huge strides. Tyson Alualu has a strong motor and I’m convinced L.T. Walton was drafted solely on his A+ effort. Even Daniel McCullers gives good chase.

For me, this is what makes Tuitt and Heyward special. Not the sack numbers. Or their pass rushing ability. Or baseline athleticism. A lot of guys are molded like that. What separates them is that hustle and fanatical effort, making plays other linemen wouldn’t even think of to try. And why both deserve every cent they’re making.