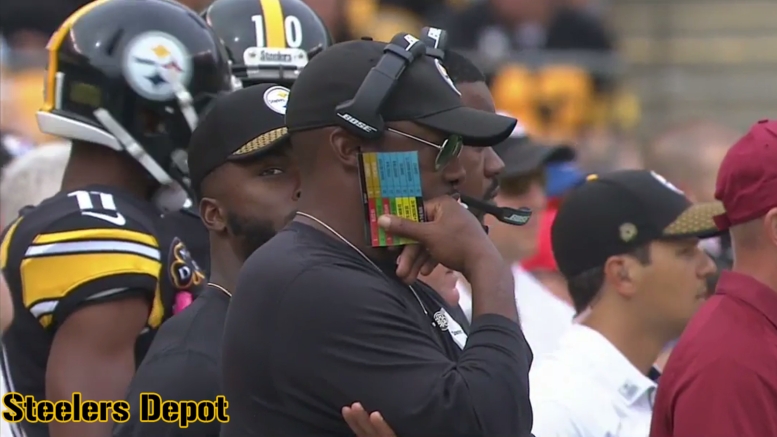 We’ve been doing this for several years now, and I’d like to think that, generally, we have come to know our readers fairly well, and have a feel for what they might find interesting. More often than not, it’s simply the same things that we also find interesting. Since we are just fans who write, after all.

And I know that for myself personally, pre-game preparations and all sorts of things are interesting to me. Such as the ‘scripted plays’ to start the game that you always hear about, when teams come out with a number of plays that they want to run to start out with.

That’s why I was pleasantly surprised to see yesterday when the Pittsburgh Steelers team website spoke to head coach Mike Tomlin and asked him about this process of scripting plays, giving us a bit of an inside look, so I wanted to pass some of that along for those who might not have seen it.

He added that at times “they just want to be thoughtful about being versatile, or showing a variety of types of plays at the early stages of games”. But the script is also not scripture. It can be deviated from if necessary.

As Tomlin points out, the script does not apply in situational football, and I would imagine that the reasons for that are pretty obvious. You can’t plan for a third-and-two to occur on the sixth play of the drive, for example.

He said that most scripts consist of roughly 10 to 15 plays, but that it could take that many plays and half more, or even more than that, to actually run through the full script, depending on how the game circumstances dictate it.

Something that might surprise you is that the head coach said that “defenses have a script as well. Given certain circumstances, if they run this personnel group out there, then this is what we’re going to call in this order, in an effort to show variety on the other side of the ball”.

Tomlin also said, when asked specifically, that they do at least occasionally practice their play script in the sequence in which it was written, though I suppose that should be pretty obvious. This is all a standard feature around the league, of course.

But it’s one that the average fan doesn’t have access or much insight into, so I do find it enjoyable when we get to hear directly some somebody who has a hand in the script. Given the way the offense has come out, scoring a couple of touchdowns on their opening drives, I would say that it has been effective recently.