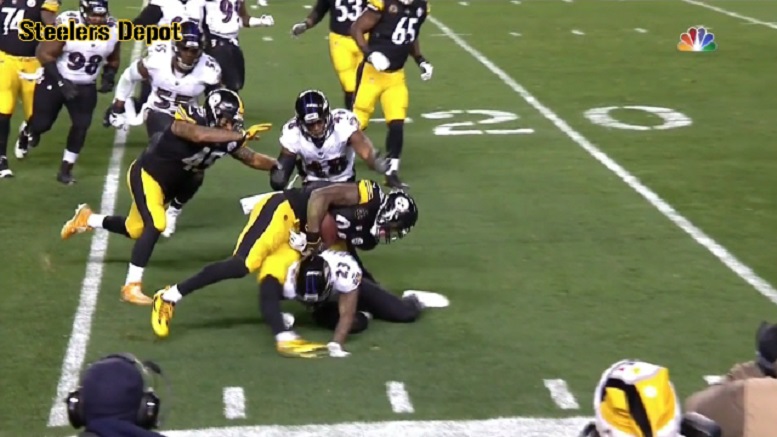 Pittsburgh Steelers running back Le’Veon Bell played 80 of the team’s 89 total offensive snaps Sunday night against the Baltimore Ravens and he probably would have played a few more had he not had to leave the game in the second quarter, presumably to have his left knee looked at be the medical staff.

Brown limped to the Steelers sideline after talking a low hit from Ravens safety Tony Jefferson at the end of 4-yard run around right end with 8:21 left in the second quarter. As you can see by the replay of the hit that I have included for you below, Bell is lucky that his left cleat didn’t stick in the field while taking a hit to his left knee. You can clearly see that Bell hyper-extended his knee courtesy of that hit just the same. Had his cleat stuck in the field, his 2017 season might be over right now.

Bell returned to the game prior to the first half ending and started the second half. After the game was over, Steelers head coach Mike Tomlin said that Bell suffered a quad injury and mentioned nothing about his knee. It will now be interesting to see Bell is limited any during practice this week as the Steelers prepare to host the New England Patriots next Sunday at Heinz Field.

The last time the Steelers played the Patriots was in last year’s AFC Championship game and Bell only played 11 snaps in that contest due to a groin injury, which eventually needed to be surgical repaired during the offseason.

Bell, by the way, leads the NFL in total snaps played by a running back with 842. The Steelers offense has run 872 total plays so far this season so you can clearly see that he doesn’t leave the field much.