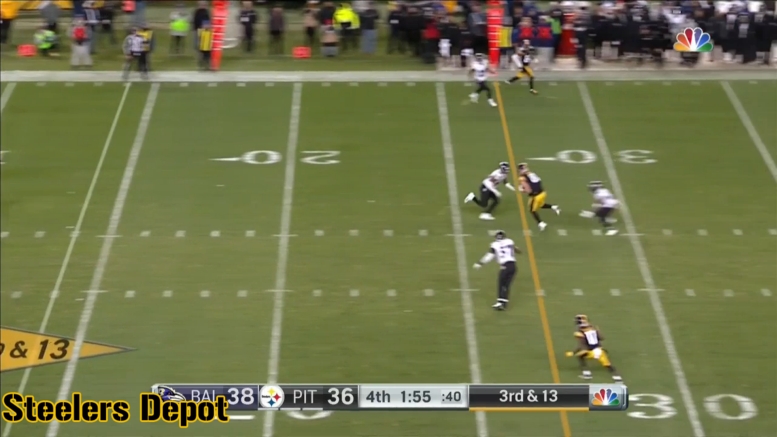 Well, well, well, who knew that tight end Jesse James had it in him? the third-year tight end for the Pittsburgh Steelers came up big for his team on Sunday night, in case you missed it, having a career day with 10 receptions for 97 yards, just missing out on a rare 100-yard game. Even the great Heath Miller only had a handful of those.

But it wasn’t the stat line that won the game for the Steelers. It was the clutch moments. I feel as though I have been among James’ harshest critics over the course of the past two seasons, but, as I wrote during the game on Twitter, he had the biggest moment of his career up to this point.

The Penn State product was a frequent and reliable target, hauling in 10 of the 12 passes officially credited as having gone in his direction. The only two blemishes on his resume consisted of a seeming miscommunication—albeit on third down—and a pass broken up by Eric Weddle on second and one at the 11-yard line.

He caught everything else, and that includes three consecutive catches on the game-winning drive with under two minutes to play. The drive started out disastrously, with Ben Roethlisberger taking a sack. Then he checked down to James under pressure for six yards.

On third and 13, it was James coming out of the right slot with the clutch grab between two defenders for 16 yards, up to this point arguably the most significant play of his career. Not exactly a showman, even he could not help but give a faint and timid ‘first down’ gesture after the play.

Also key in that exchange is the beating that he took after the reception, taking a lick from the front by Matt Judon ad Tony Jefferson wrestled him down from behind. It is beginning to become a theme that the tall target is holding on to balls through collisions.

That is exactly the sort of play that the Steelers need for him to deliver when he is tasked with being the starting tight end, which has been for most of the past two seasons, with brief diversions. They don’t need him to be a glorified wide receiver. They just need him to be reliable and make a few tough snags.

It’s rare at this point that James even stays in to pass protect, a distant departure from the bulk of Miller’s career, so James is routinely a target in the passing game, making it all the more important that he is able to be a meaningful contributor.

Roethlisberger took what the Ravens gave him, however, and they frequently gave him James over the middle, and the young tight end delivered time and again. He’ll never be the most impressive or athletic option out there, but the Steelers don’t need him to be. They just need what he gave that night.