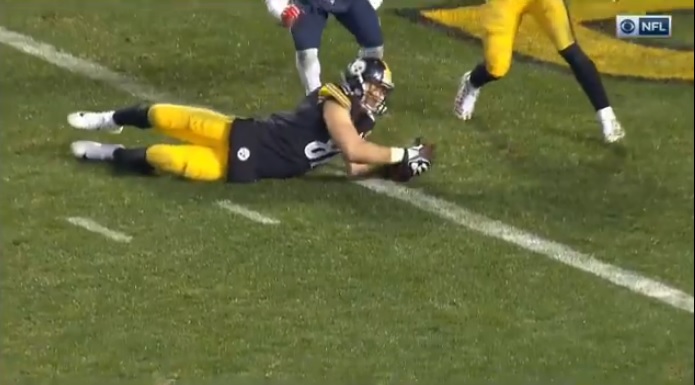 None of that wound up happening Sunday night in Pittsburgh. And so the New England Patriots prevailed, yet again, 27-24 over the Pittsburgh Steelers.

James seemed to catch the game-leading TD with less than 30 seconds remaining. But the refs, after review, ruled James’ didn’t secure the ball all the way to the ground, nullifying the touchdown. Down three the Steelers threw complete but in bounds, a running clock with no timeouts. Ben Roethlisberger faked the ensuing spike, freezing in the pocket before trying to drill Eli Rogers on a slant. The pass was tipped and picked off by safety Duron Harmon, ending the game with five seconds left.

It was one of the most exciting games of the NFL season. One that, unfortunately, ended in bittersweet fashion. The Steelers took a 17-10 halftime lead by doing what is most effective against the Patriots. Controlling the clock. In the first half, they possessed it for 19:53, Ben Roethlisberger and Le’Veon Bell on fire. Antonio Brown was not part of those Killer B’s, leaving the game with a calf injury after getting his left leg hit in the end zone.

Bell finished the game with 24 carries for 117 yards and a touchdown. Another 48 yards came on five catches.

New England used a Rex Burkhead one yard dive to get on the board first. Eli Rogers and Martavis Bryant found the end zone for Pittsburgh in the first half while each kicker, Stephen Gostkowski and Chris Boswell, put one through the uprights.

Brady and the Pats marched on a 12 play, 75 yard drive to start the second half. Brandin Cooks caught a four yard TD on the final play but Gostowski’s extra point went wide left, keeping the Steelers ahead 17-16.

Vince Williams picked Brady off a drive later, returning it to the Patriots’ 22. The Steelers capitalized on a Bell three yard run over left side, diving into the end zone. He again proved why he’s the best in the NFL. Late in the fourth quarter, the Patriots threatened. But Bud Dupree sacked Tom Brady on 3rd and 7, forcing them to settle for a field goal and cutting the lead to 24-19.

The Steelers went three and out, the first three and out on either side, and New England got the ball back. As Brady has done so many times, now 51 in his career, he quickly spurred the offense downfield. Rob Gronkowski caught all three passes and Dion Lewis sprinted in from eight yards out. Gronk leapt over Davis on a fade for the two-point conversion and the Pats went back ahead 27-24. Gronkowski torched Pittsburgh again, catching nine balls for 168 yards on a game-high 13 targets.

Then things went bonkers. Getting the ball back with :52 seconds and one timeout, Roethlisberger hit JuJu Smith-Schuster on a shallow cross over the middle. The rookie racked down the left sideline, out-running everyone but ran out of gas at the end. Still, it was a game-changing play, a 69 yard completion to the Patriots’ 10. There was 38 seconds left.

On the next play, Roethlisberger seemingly went through every read before finding an open James one yard in front of the end zone. James made the catch and extended both hands over the plane of the goal line for what looked like, and was initially ruled, a touchdown. But under automatic review, the refs judged James did not secure the ball to the ground and the pass incomplete. You know the rest. Completion, fake spike, interception.

Heartbreaking. And ever so close.

NOTES: The Steelers finished the game with 35:07 time of possession. They were penalized six times for 63 yards…New England had two flags for four…Brady threw for 298 yards in the win…Martavis Bryant was impressive, finishing with four catches for 59 yards and a score…Dupree and Cam Heyward sacked Brady….for Heyward, it was the 10th of the season, the first Steeler to do it since 2010.