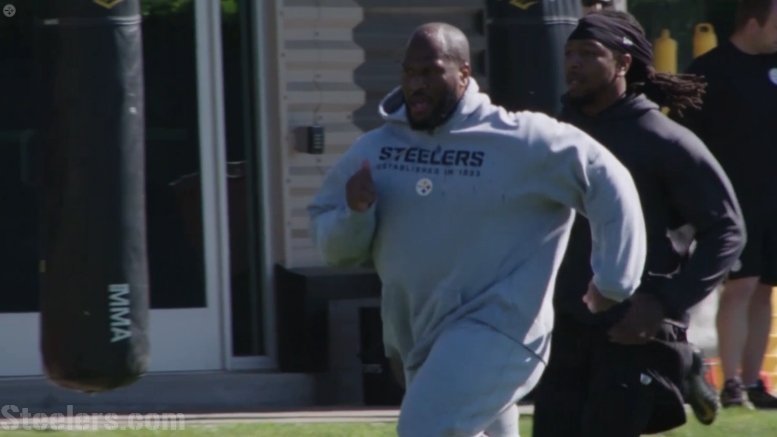 When the Pittsburgh Steelers re-signed James Harrison following the 2014 season after he retired for a month, the organization chose to do so early in the offseason after he made the decision to return for the 2015 season.

General Manager Kevin Colbert said that the decision to make the signing early on in the offseason rather than later to give the then-37-year-old more time off was because of what they saw in the locker room the previous season. They saw him as a good influence on their young linebackers.

“The value he provides right now for those young guys trumps that” Colbert said. “He’s valuable in the building right now. He’s been in the building, voluntarily, really since the end of season. It’s been amazing to watch. Those young guys see it and think, ’OK, I’m supposed to do that, too’. They’re all kind of following his lead”.

At the time, Jarvis Jones, the outside linebacker that they originally drafted to replace him, was in his second season, as was Vince Williams, and Ryan Shazier was in his first year. They knew they were going to be drafting linebacker high in 2015, and they took Bud Dupree in the first round, then Anthony Chickillo later.

The Steelers liked the work ethic example that he set for these young players. And for a time it was a relationship that worked. Dupree even acknowledged that he was a mentor. But after a while, the schtick began to wear thin, evidently, and that seemed to coincide with Harrison not getting his way.

Perhaps they made an error in judgement in viewing Harrison as a leader, a role model, or a mentor. Merely, he was an example of the sort of work ethic that is required to excel at this level. In that function, he was effective.

We’ve written much about Harrison in the frame of reference of leadership, but clearly we have been in error. He wasn’t much more than a workout tutorial. In light of recent statements from teammates, he did little to take players under his wing, particularly while he was not getting his way. His example was useful at the time, but the young core has grown up.

His behavior is the antithesis of leadership. Darrius Heyward-Bey, frankly, is a far better example of a leader. During the Martavis Bryant drama, he conceded that he wants to play a lot more than he does, too, but he still does everything he can to help better the team, and that includes working with the younger players to help them improve.

Did Harrison do that, particularly this past season? Considering that the question drew a laugh, I wouldn’t think there was much of that. How much help was he to T.J. Watt? Fortunately for the Steelers, the rookie starter didn’t need it.

The saddest thing for me about this whole story is the fact that an all-time great for the team turned into an insubordinate for not getting his way. That is a far more embarrassing way to exit than by simply physically flaming out.