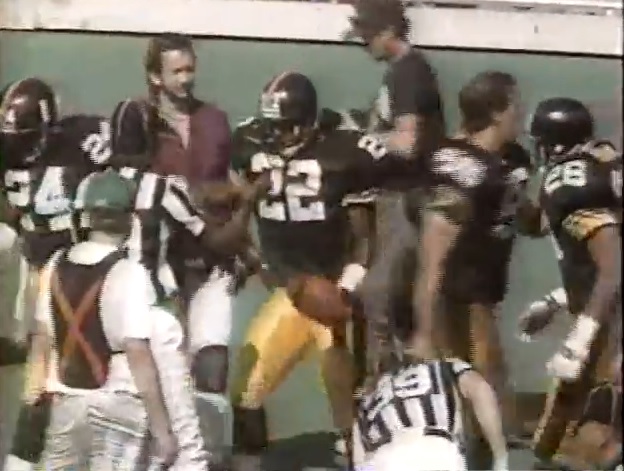 Bringing you another Pittsburgh Steelers’ interview courtesy of our good friend Ron Lippock of the Pittsburgh Sports Daily Bulletin. Today, Ron talks to former Steelers’ safety Larry Griffin. Griffin played for the Steelers from 1987 through 1993, starting 12 games and picking off 13 passes. Here, they discuss how Tony Dungy convinced Griffin to keep his NFL dreams alive, the difference between Chuck Noll and Bill Cowher, and crazy camp stories with Greg Lloyd.

First, tell us how you got to become the Director of HR for the Carolina Panthers – what drove you in that direction?

When I left the Steelers I went to work for Duke Energy in Charlotte, North Carolina. I wanted to be in corporate. I started in government affairs and then moved to the services department. Something then hit me – why not HR? I had my degree in Labor Relations. I told my boss – the VP of Government Affairs that. He talked with the head of the department and I moved there and had been at Duke for seventeen years.

I was ready for a change though when I got an email from the NFLPA about a job opening at the Panthers. I submitted my resume and got selected for the job.

How has your experience as a former player helped you in that role?

The big thing was that as a former player I know the business and atmosphere of football. And I knew HR – I was trained well by Duke.

I work mostly with the business die but I work with players on development trainings – and their benefits.  I work strictly with the active players,

So you had an interesting road to Pittsburgh – going through a couple of teams first. Tell us how that occurred?

I was drafted by the Oilers in 1986 – in the eighth round. I thought I played well in training camp and I thought I would make the team. I was the 199th pick on the draft – the first defensive player they chose that year.

I recall I had some hamstring issues but I played well. I had a big interception versus the Saints my last preseason game. I remember coming to the sidelines and players slapping me on the helmet and saying I made the team. Few rookies made teams then – the draft went twelve rounds. I felt comfortable with my play though. But Glanville decided to go with veteran players. That rubbed me the wrong way. I didn’t understand the business then. Experience means a lot to organizations – I understand that more now.

After I was cut I went back to Chapel Hill. But Houston called me back about three-to-four games into the season when their safety got hurt. I played special teams but when the guy got healthy it was see you later again.

I was convinced I wouldn’t play again. I had good size and speed – but it was a different business. I decided to go into corporate then and started pursuing it.

But that clearly wasn’t the end of it.

My agent called me – Miami wanted to sign me. So I went to camp with them but the same thing happened. They went with veteran players. Don Shula said they needed to go with the Blackwood brothers.

So I decided I was done. I played well in Houston and Miami but they both went with veteran guys. I understand – they wanted guys who understood the game. Who might not have the physical skills I had but who could play well because of their knowledge of the game.

So I got some interviews – one with IBM – I was looking to find a corporate job. Then the Steelers called me – Tony Dungy called. I told him I was done playing – that I was tired of being cut despite playing well.  He stayed on the phone with me for twenty-to-thirty minutes to convince me to play. He assured me that I would be given a chance. He told me that if I went to play for them then, he’d guarantee I’d get an opportunity to stick around. It was a strike year – it was an opportunity for them to evaluate guys. When the other guys came back, I’d be evaluated on my play.

So I gave it a shot. I went in and played well. I played the same as I did in Miami and Houston – I played well and Dungy recognized that. My first game I had an interception so he saw that right away I could make plays. I was smart and had good ball skills.

Even though it was a strike year, did anyone help mentor you as a new guy in Pittsburgh?

I felt confident in my skills – we were all young players at the time. Woodruff was one of the only vets there then. Woodson and Hall were in their rookie years. Everett was still there and Sanchez was there from the USFL.

Hall was from the ACC, we knew each other from college. So that made me feel more comfortable. Woodruff was a leader – and Donnie Shell was there too. He mentored me at safety – to see the scheme – what the offense was trying to do to us. I played a bit of cornerback and safety so Shell and Woodruff both helped me the most.

So – tell us a story that you remember most from your time in Pittsburgh?

Oh – one that comes to mind! Greg Lloyd and the rest of us used to go to Bobby Dells in Latrobe – it was a local hangout – for wings and beer, though there wasn’t much drinking during camp.

Well, curfew was 11:00 and it took about five minutes to get back from Dells. So we stayed close to the last minute and jumped into Greg’s truck – he had one of those big Dually trucks. Lake jump into the back and I was in the front seat. We had seven minutes to get back. We pull out – and the parking lot there had a bunch of concrete barriers – I guess for safety. Well Greg’s speeding back, weaving in and out of the barriers. Carnell was in the back and we were both yelling “Don’t do it! when we smashed into one of the barriers. My head hit the roof and Carnell landed in the front seat. All we had to do was take the regular way back and we would have made it on time.

Well, we get out of the truck and Carnell is limping and I’m holding my head. We were afraid to tell coach but we ended up having to and told the trainer who had to work on Carnell’s leg a bit. I just remember Greg when we got back kicking the truck and yelling “To hell with this f’in truck!”

Tell me a bit about how you and the team adjusted to Noll’s departure and a new coach in Cowher coming in.

A player can’t control who comes and goes. Guys loved Chuck Noll up to his death – he was one of the best coaches ever in the game. I have a lot of respect for him – we all did.

When Cowher came in – he took what was there – the tradition and way it was built – and ran with it. He kept the Steelers tradition with what Chuck and the Rooneys built. He didn’t need to make many changes – no matter what you’ll still have success due to the way the organization is run. So that’s what he did. He was a player’s coach. I used to laugh and joke with Bill. He was a N.C. State guy and I was a North Carolina guy so we used to have side bets on games. He was just a little more personable than Chuck.

Tell me a bit about how you handled the stress of making a roster?

At some point you just have to feel comfortable with yourself. I was confident in myself. Noll always said “You play football and let us make the decisions.” That’s what I did. I focused on playing football – I never let the pressure get to me. You can only control your play and how you will perform. I focused on that. I felt like I fit in with the guys. We all knew the rules. My role was the nickel safety, to make plays on the ball and play some strong safety. I could make plays – I enjoyed my role.

So any advice for guys entering the game today?

Work hard – during the offseason also. Be humble. Like Chuck said – control what you can control  – let the decisions take care of themselves. Be humble – it’s a wonderful opportunity. Don’t take it for granted. Respect the game and the opportunity you are given.