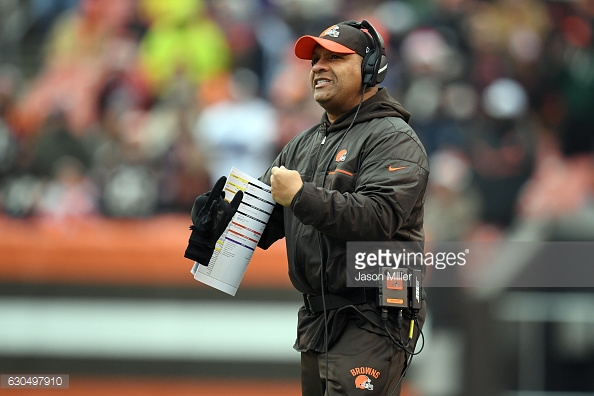 Look, I’ve praised Hue Jackson before. I thought he earned the chance to get another head coaching gig after taking the lovable losing Oakland Raiders to an 8-8 record years ago. I thought he was, and probably still is, a great playcaller who makes life stressful for defenses.

But man, he is really screwing up this whole head coaching thing.

We’ve already written about how the team has sent DeShone Kizer to the island of misfit toys. How his confidence is shot, Jackson consistently benching him, starting him, while publicly killing him and then screwing up trading for A.J. McCarron, somehow the only thing worse than actually trading for him. Maybe Kizer would’ve never been the answer, regardless of situation, but the Browns are too incompetent to find out.

The front office turned over which, to be fair, is probably a good thing. But it meant Jackson appeared to win a power struggle. And the organization seems to be sticking by him through at least next year.

That is, until Jackson went out and bizarrely threw his running back under the bus. After Isaiah Crowell said he was miffed why he wasn’t more involved in the offense, Jackson offered this response.

#Browns Hue Jackson on Crowell: "We have to do a better job of making sure he's involved that way. Let's move on to the Chicago game. Just because you run for 59 yards don't mean that….all 5 of us could have run through that hole. Being inspired to run is breaking tackles…"

If you can’t see the tweet, Jackson trashed Croswell for a 59 yard run, saying anyone could’ve rushed through a big hole like he had. He said that to be inspired, you need to “break tackles.” Crowell took notice, liking tweets from fans who bashed his head coach.

Now the obvious concern is if Jackson has completely lost that locker room. The defensive coordinator trashes his guys, Jackson throws his back under the bus in a year where the rookie QB has been dragged through the mud.

It’s no wonder why the Browns are the worst team in the league.

If new GM John Dorsey has any smarts, and he’s a legitimately talented general manager, he’ll can Hue as soon as the season ends. They ain’t winning under him.