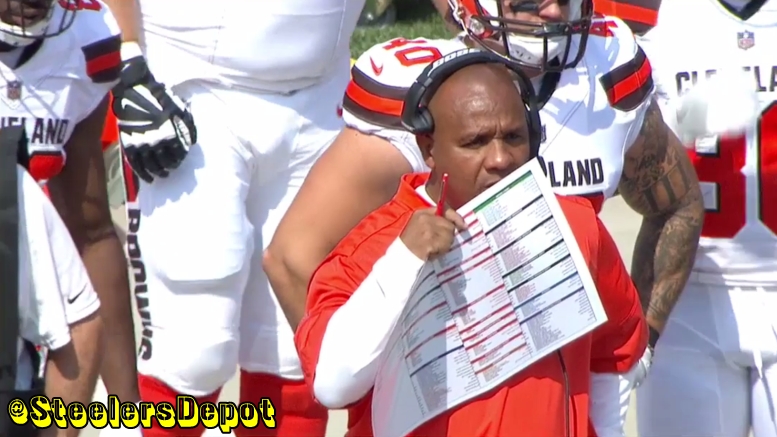 It’s hard to imagine an 0-15 season getting much worse, on the brink of a winless campaign, and yet the Cleveland Browns have seemingly managed to make the trek to futility as painful as possible. From botched trades to mid-season firings and jarring remarks from the front office and coaches that rub players the wrong way, it’s been a bumpy ride to the bottom of the barrel.

Head coach Hue Jackson said recently that he wants to get an offensive coordinator next season. General manager John Dorsey may want to get a new head coach next season. And I’m starting to buy into the idea of dumping Jackson myself.

A recent remark that he made about ‘inspired running’ or something to that effect that diminished a 50-plus-yard run by Isaiah Crowell was thoroughly poorly received, and the running back was even ‘caught’ liking various Tweets that stuck up for him.

From this, and two years of futility of course, grew reports that Jackson was losing the locker room, but linebacker Christian Kirksey shot back at that yesterday. “Hue still has the locker room”, he told reporters, after the team lost 20-3 on Sunday.

He said that he will stand behind Jackson as long as he—Kirksey—remains with the team. “That’s my head coach. Guys are still rallying behind him. We’ve just got to get through this phase”, he said. ‘This phase’ being the precipice of having the worst two-season span in the history of the NFL.

The linebacker did concede that his comments were based on merely taking the temperature of the locker room, and he didn’t exactly poll his teammates. “That’s what I’m personally thinking”, he said. “I don’t know what other people are thinking. The locker room and the vibe seems to be the same”.

As for Jackson, he remains confident and committed publicly to a Browns turnaround, yet acknowledged that the reality of the past two seasons cannot be denied. “This is who we are and what we are. Our record is what it is, what it’s been for the last two years”, he said.

“But like I said”, Jackson went on, “I’m not going to let this define our organization, our players, our coaches, as we move forward. This is not going to be who we are”. Of course, it is much easier to say that than to do it.

One might be inclined to think that the Browns’ top priority in the offseason will be getting a quarterback. But one might have thought that many times in the past, including the past two seasons, when they have passed on some young talent that has done very well. Will their first-overall pick be a quarterback? Will they sign one in free agency?