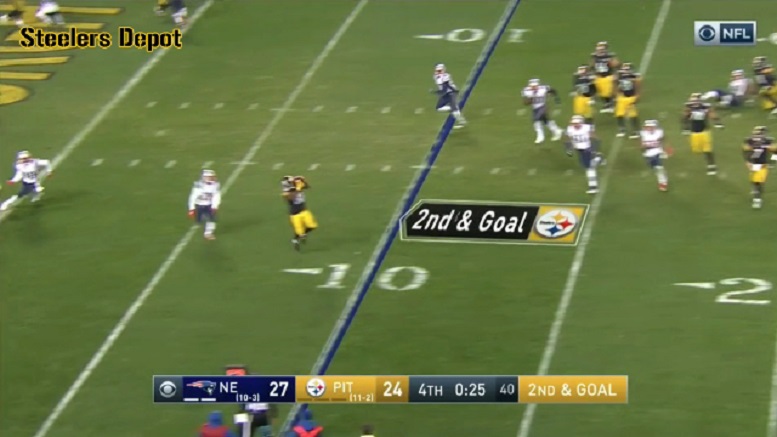 While most of you are probably already tired of talking about what transpired at the end of the Pittsburgh Steelers Sunday loss ton the New England Patriots, there are still unfortunately a few loose ends that needed to be explained when it comes to the final two play offensive play calls in that game. On Thursday, Steelers offensive coordinator Todd Haley offered up his explanation as to what happened on the first play after the touchdown by tight end Jesse James was overturned.

If you recall, the first play after the overturned touchdown ended up being a pass from quarterback Ben Rorthlisberger to wide receiver Darrius Heyward-Bey on a crossing route after the Patriots seemingly blitzed. According to Haley, however, Heyward-Bey was supposed to only catch that pass if he knew he could either score or get out of bounds.

“We called an incomplete or out of bounds situation after the ball was ruled incompletion,” Haley said Thursday after practice, according to the Pittsburgh Tribune-Review. “We don’t want the ball in the field of play there without a timeout. I’m never going to question Ben or Ben’s decision of thinking Hey-Bey could get out of bounds, but as far as scenario. we’re in an incomplete or out of bounds situation. That clock will not be running if things go the way they’re supposed to go and then you’re getting guys on the field for each particular play you want on the field and your counting on having three shots at the end zone.”

So, in retrospect, would Haley have liked to have had wide receiver Martavis Bryant on the field in that situation instead of Heyward-Bey?

“Not the first play,” Haley said. “Again, it’s an incomplete or out of bounds [play]. We teach the receivers if they dont think they can get out of bounds to drop the ball as long as it’s not fourth down. Again, both guys thought that it would go different and it didn’t and it’s a great learning situation as far as that goes because we practice that every Friday. We go through the last seven plays, incomplete or out of bounds. You cant catch the ball if you cant get out of bounds and we got one caught in bounds. So Tay’s standing on the sideline next to me. But as far as the play, I called the best play I thought for the situation and again, Tay hadn’t practiced where he would have been and we didn’t feel comfortable with him being in there.”

So, why not just have two plays called coming out of the overturned touchdown just in case the first play goes wrong and the clock continues to run?

“There are lots of times we have two plays called in the huddle,” Haley said, according to Ray Fitipaldo of the Pittsburgh-Post-Gazette. “That was an incomplete or out of bounds situation. You cannot, in that situation, get caught in the field of play. We call plays accordingly. That normally would be [Antonio Brown] coming across the field, which would get a lot of attention. We had four guys in the end zone. They made us hot, which they hadn’t done all day. We probably have to make sure Hey-Bey gets out of bounds or get the ball thrown away.”

Leave it to the Patriots coaching staff to do something they hasn’t done all day. That’s great coaching right there and why the Patriots have won so many Super Bowls with Bill Belichick as their head coach and why Pittsburgh just cant seem to beat New England when quarterback Tom Brady is under center.

In summation, after Heyward-Bey was tackled in bounds, Roethlisberger really didn’t have much of a choice being as the head coach Mike Tomlin didn’t want him to spike the football to stop the clock on third down. He ultimately decided to run a fake spike play with time clicking down and as all of you know, that pass over the middle to wide receiver Eli Rogers wound up being deflected and ultimately intercepted.

While Roethlisberger was ultimately charged with the interception that effectively lost the game for the Steelers, Tomlin and Haley are the ones who should be fully saddled with the loss.

As for Heyward-Bey, he;’s dropped several passes during his career when not even trying to and on Sunday it really would have benefited the Steelers had he drooped another one.