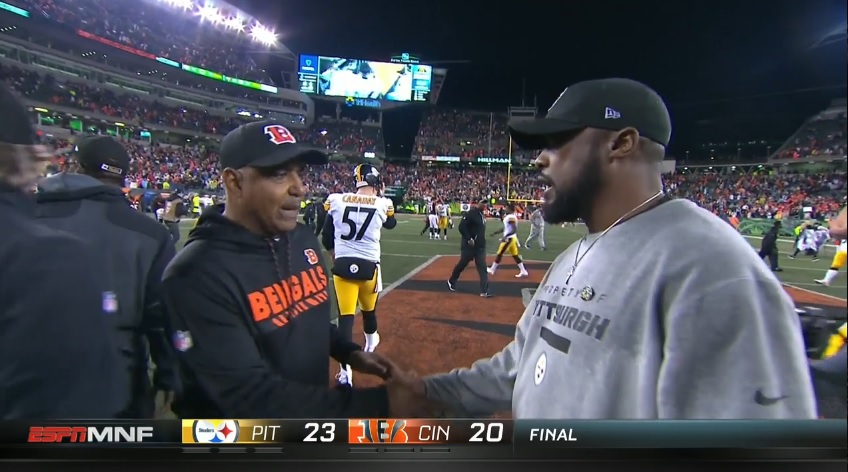 You almost had me? You never had me!

Those were some of the beginning lines to the glorious, and seemingly never-ending, Fast and Furious franchise. That’s how Dominic Toretto schooled Brian O’Conner after edging him out in their first race.

That’s how I think about the Pittsburgh Steelers. These wins haven’t been pretty. And yes, there’s closer than what they should have been.

It’s a central theme I’ve touched on since the Steelers notched their latest victory, rallying from a 17-0 deficit to beat the Bengals at the buzzer. Giving up would’ve been easy Monday night. Down big. On the road. New faces on defense. No one knew what Ryan Shazier’s situation was. And the Steelers were utterly out-muscled at the line of scrimmage.

Giving up wasn’t part of the plan. Led by the Killer B’s, Chris Boswell topping it off, the comeback completed. One of several this season. That’s thanks to leadership. Mike Tomlin advancing the Steelers’ culture. And the core players, Cam Heyward and Ben Roethlisberger are the first who come to mind, for keeping the team focused and mentally tough.

The last time the Steelers were down 17 and won? Denver in 2015. A game where Mike Tomlin’s one-liners and motivation was at its peak.

“Don’t blink. I ain’t blinking. Don’t you blink. Let’s go! You blink, I cut your eyelids off.”

They didn’t blink then. They didn’t blink Monday night. That’s what makes this Steelers’ team special. Not because of the schematics or blowing out an opponent – that isn’t going to happen. It’s not cold and calculated like it is up in New England. There’s an emotion in Pittsburgh, a resolve that gets created in those big moments. And the Steelers will be able to call upon that in the playoffs, with the pressure on, when other teams might fold.

That’s what the Bengals did. Again. There’s no better display of two different coaching styles, and outcomes, than there is with Tomlin and Marvin Lewis. Tomlin’s Steelers rise to the moment, Lewis’ Bengals shrink. Monday was just another chapter in the same ‘ol book.

Yeah, it’s not pretty, it’s not perfect. And maybe not even ideal. But it’s Pittsburgh. And it’s hard to trade it for anything.

Winning is all that matters. Just ask Toretto.

“Ask any racer, any real racer, it don’t matter if you win by an inch or a mile. Winning’s winning.”

Most of these wins are by inches.

But man, it sure beats the hell out of losing.