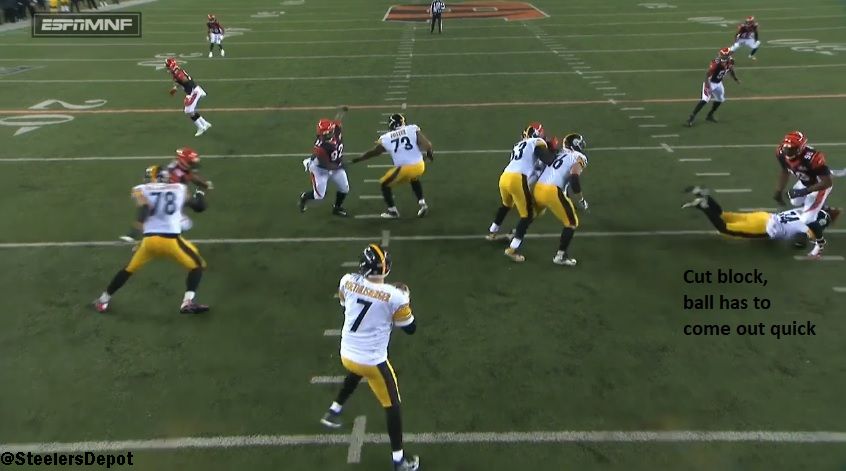 We haven’t done a lot of film room this week because frankly, that focus has barely been the talking point. So let’s change that today. I am constantly amazed by the chemistry and trust Ben Roethlisberger and Antonio Brown share. Despite not practicing all week, that was still on display Monday night against the Bengals. One play really stuck out, a true YOLO ball from Big Ben. In an incredibly critical moment.

This ball is designed to get out of Ben’s hand quickly. The right tackle is cut blocking the end on a bubble screen to the field and a slant/flat to the boundary. Roethlisberger, based on what he sees pre-snap is already locked onto hitting Brown on the slant. Ideally, the linebacker is supposed to expand on the flat and once Brown clears him into the next window, Roethlisberger has an easy pitch and catch.

But the LB and corner pass off each player and the linebacker keeps inside leverage, not letting Brown work into that next window. Roethlisberger holds onto the football to try and wait for Brown to clear him. Time that he simply doesn’t have. The rush is on. 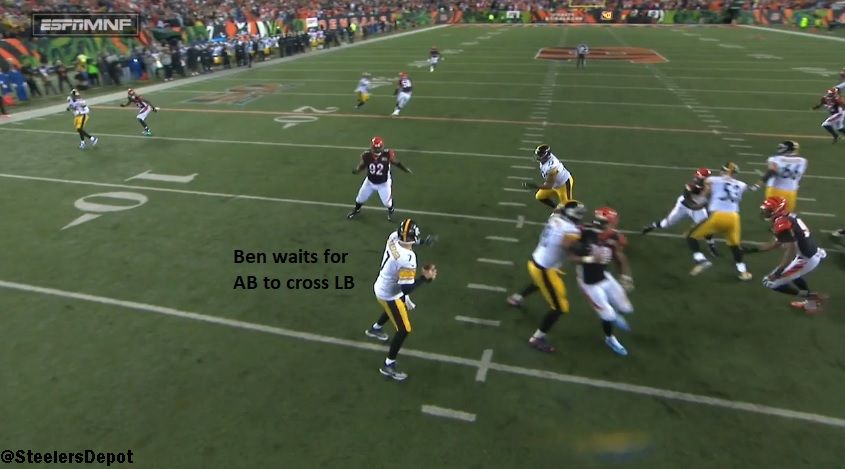 There’s pressure everywhere. The backside end now free after fighting off the cut block and some frontside pressure from the line that didn’t expect to block nearly this long (and trying to pick up a T/E stunt).

In an instant, at the very last moment, Brown and Ben get on the same page. There isn’t time to try and cross the linebacker. As Roethlisberger throws the ball, a moment before getting smacked, Brown chops down and sits on the linebacker’s outside hip, converting a slant to what is essentially a curl. He works back to the ball, makes the catch, and picks up 15. 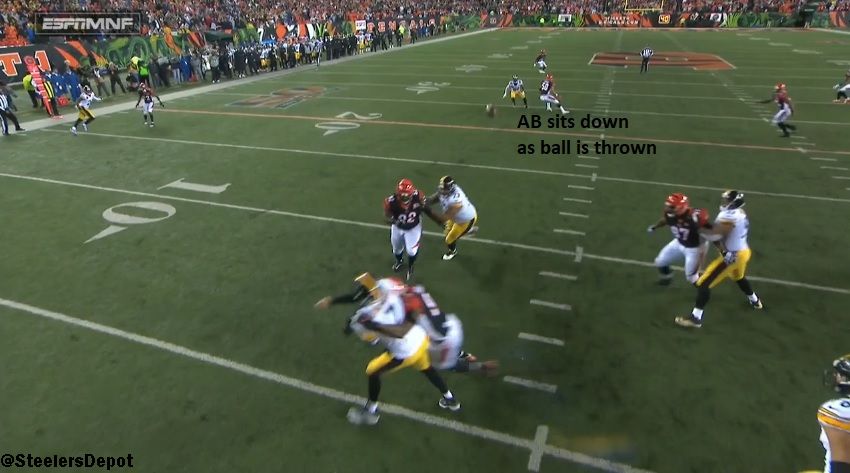 This was 2nd and 5 with the Steelers backed up and down ten in the fourth quarter. If this pass is incomplete or worse, intercepted because of miscommunication, this game is probably over. Even a Steelers punt would give the Bengals great field position and the chance to extend the lead all the more.

These plays just shouldn’t happen. And the funny thing is that it pretty much already did. The final drive to beat the Colts was the same call. A slant/flat where Ben was waiting for Brown to get clear. And Brown, working the scramble drill, ran away from his defender to get in Roethlisberger’s vision, make the catch, and pick up 32 critical yards.

They make the very difficult seem routine. Seeing the same thing at the same time and reacting the same way. That’s special. Don’t take it for granted.