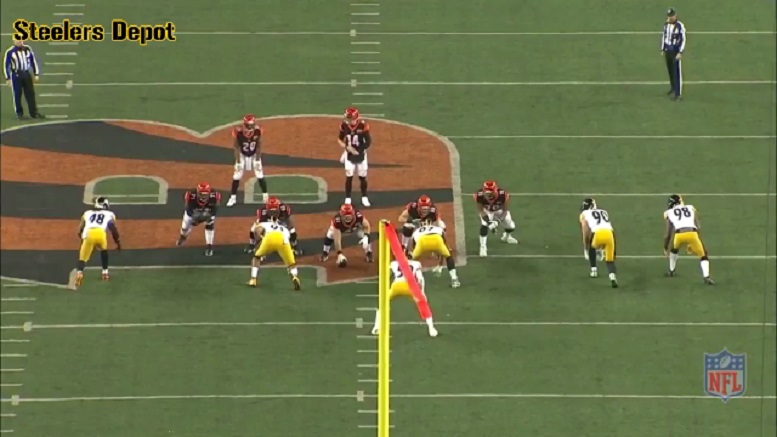 A defense’s ability to disguise coverages before the snap is crucial for the success of a defense. Many teams will implement pre snap movement to change positioning of the safeties and depth of corners to give an offense a false read on what coverage the defense is in.

In the first half of the Monday night game against the Cincinnati Bengals, the Pittsburgh Steelers lack of disguising coverages on defense before the snap gave multiple opportunities in which quarterback Andy Dalton was able to attack those coverages for big gains in the passing game.

During the Bengals first offensive snap of the game, as seen below, the Steelers do not attempt to disguise the fact they are in cover 3. The first place a quarterback looks during his pre-snap reads are to the safeties. Dalton sees right away he has 1 safety deep middle and another safety in the hook curl zone on the wide side of the field. The second read he makes is the depth and alignment of the corners. Both corners are outside of the numbers and 7 yards back giving the indication that this is your standard cover 3 look. 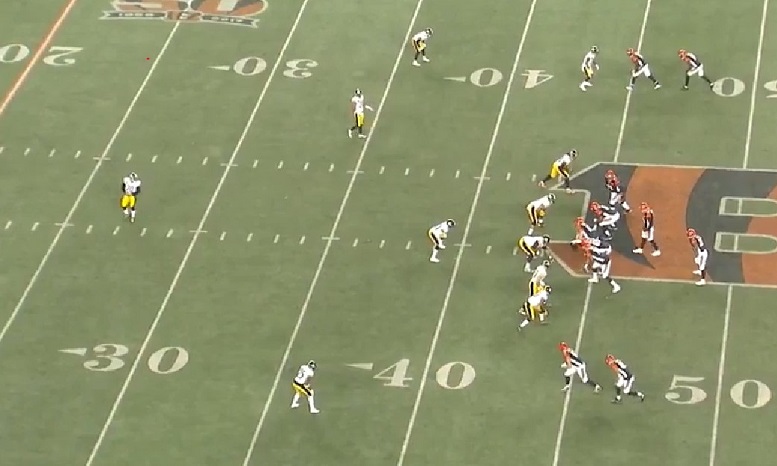 The third pre snap read is the blitz, who could be a possible threat and do they need to swing the protection. As you can see, from the two pictures, Dalton makes one call to the line to swing the protection due to the possible threat of pressure from left side. Bengals running back Joe Mixon moves to the right side to pick up any edge pressure from right hand side and the offensive line is able to slide to pick up potential blitz on left side. 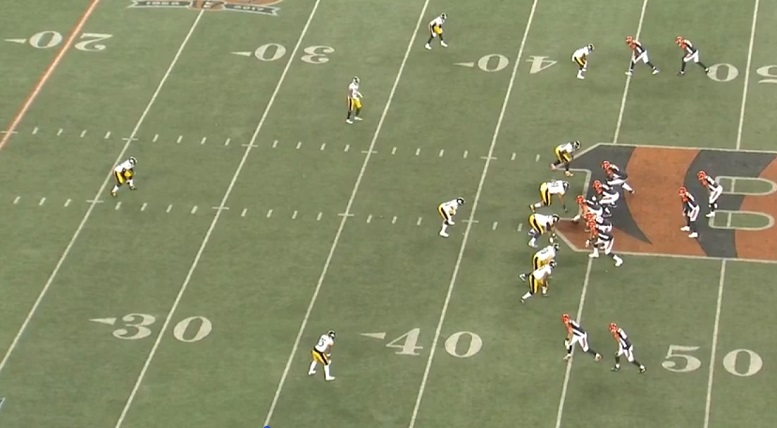 As Dalton begins his cadence and snaps the ball the defense does not shift confirming the fact they’re in Cover 3. The route combination designed by the Bengals was designed to attack cover 3. As seen in the gif below, Steelers outside linebacker T.J. Watt is the hook curl defender but is on the line of scrimmage making it very hard for him to get depth to take away the seam route by tight end Tyler Kroft. Bengals wide receiver Tyler Boyd is seen running a fade route forcing Steelers cornerback Artie Burns to play in between the two vertical threats which makes an easy quick throw for Dalton for 19 yards.

Another example in first half, is the first touchdown reception of the game by Bengals wide receiver A.J. Green. The Bengals align in a 3 by 1 set which means three receivers to the one side and one receiver to the other. Green is matched up one on one on Steelers cornerback Coty Sensabaugh. 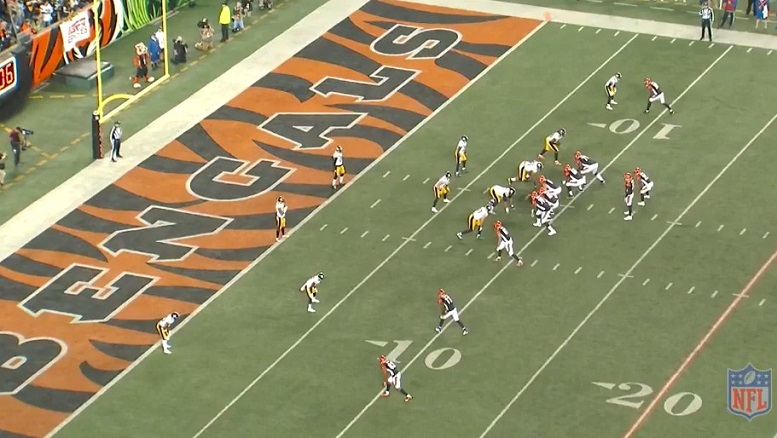 The Steelers attempt to disguise the coverage a little bit by showing a two-high safety look before adjusting to cover 1 when safety Sean Davis comes close to line of scrimmage to cover Kroft. Steelers safety Robert Golden can’t get over the top enough to help out with Green and Sensabaugh gets beaten badly for a touchdown.

As the Steelers get closer to playoffs and start playing more elite quarterbacks, their defense will need to become more creative in their pre snap movement to keep opposing signal-callers guessing.  The defense can then begin to dictate what the offense does instead of allowing the offense take advantage of what the defense is giving them like Bengals did in the first half of the Monday night game.