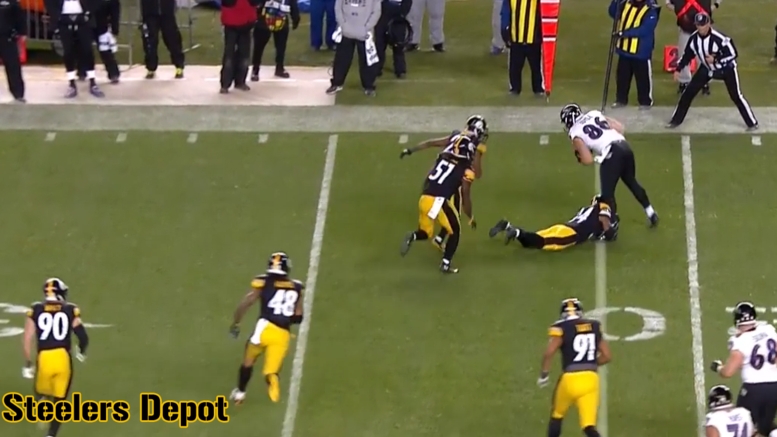 I suspect that there is quite a bit of interest right now in Pittsburgh Steelers rookie cornerback Cameron Sutton, and for good reason. Depending on what happens today and tomorrow, he could end up starting against the New England Patriots in the biggest regular season game.

Considering the fact that he was on injured reserve just a few weeks ago, that is certainly a measure beyond where pretty much everybody expected he might be at this point in his rookie season. Of course, we would not be here were it not for injuries.

Still, here we are, and we have film to look at pertaining to Sutton, so we might as well attempt to get out of it what we can, as I did last week. Here, I have six plays from Sunday’s game that I want to take a look at.

This ended up being an incomplete pass forced by pressure, but when Joe Flacco uses play action, he tends to look long. Sutton didn’t even give him that option with strong coverage all the way down the field here on Chris Matthews.

Later in the quarter, closing in toward the end of the first half, former Steeler Mike Wallace was able to use the threat of his speed to run Sutton off, though he was never actually in a backpedal. The receiver was able to use the separation to pick up 18 yards, but the rookie promptly made the tackle.

On the tail end of that drive, running back Alex Collins was able to take advantage of some shoddy defense on the perimeter to bounce a run off right end for an 18-yard touchdown. Sutton was a part of that, not properly reading who was on the end, which allowed the back to slip outside.

Into the fourth quarter, however, he again showed the basic ability to make a tackle, which is in short supply these days. On second and 11, he was able to hold tight end Nick Boyle to just one off of a screen pass.

One two plays late in the game, Sutton was matched up against the veteran Jeremy Maclin, who didn’t end up catching either pass. On the first attempt, he was nearly impaled by L.J. Fort, making the mistake of drifting into the linebacker’s coverage.

On the other, he did nearly secure the ball on a deep back shoulder pass against Sutton, but the wide receiver could not keep his feet inbounds in the process of making the catch. The back shoulder makes this difficult to defend, but given the game situation, you have to know the sideline is where the ball will be placed.

The rookie is going to have to be schooled hard, facing perhaps the toughest test possible in going up against Tom Brady in the next game. If he is able to play well in this game, it would bode well for his future, I’ll say that much.