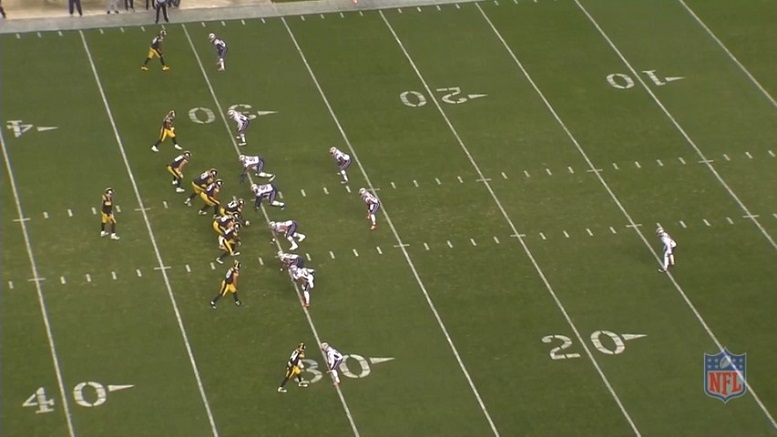 Would the Pittsburgh Steelers have won against the New England Patriots with a full game of wide receiver Antonio Brown? Maybe, but there is no way of saying for sure. What is known is that the presence and absence of Brown caused a rippling effect for both the Steelers offense and Patriots defense. Though Brown finished with just two receptions for 24 yards, it was evident that his presence on the field opened up the passing game for other targets such as Martavis Bryant.

The Steelers and Ben Roethlisberger faced this look quite often in the first half. The Patriots often had one single high safety who would shade over to Brown’s side. This leaves Bryant (left side of offense) with one on one coverage. Without a safety over top to negate Bryant’s long speed, the Steelers had a golden opportunity to take advantage of Bryant’s speed.

Roethlisberger gives a very brief look at Brown before firing up a deep pass to Bryant who seems to have a half step on the Patriots cornerback as the pass nears the end zone. Though Roethlisberger’s pass is out of bonds, it is plausible that with a better located pass, Bryant has a good chance of making a play on the football and possibly scoring a touchdown.

Once again, Brown is looking at being double covered while on the other side of the field, Bryant is looking at one on one coverage. As Roethlisberger sees the Patriots safety jump an inside route, he immediately throws another deep ball to Bryant. This pass is better than his first deep shot and after an incredible diving effort by Bryant, the Steelers are able to progress the football 39 yards.

It was looking like the once troubled receiver was in store for a huge day as the Patriots could not keep up to cover Brown and Bryant. Though this changed drastically after Brown left injured with a calf injury and the Steelers were forced to adjust their game plan in the second half.

With Brown out, the Steelers relied on Le’Veon Bell heavily in the second half. The shift in game plan meant that Bryant often found himself being substituted out. Not only this but when the Steelers did come out throwing, the Patriots were now prepared for Bryant due to Brown’s absence.

The Patriots were now playing with two deep safeties, one to monitor the middle of the field and the other to drift towards Bryant’s side (right side of offense). Without Brown, the Patriots next biggest concern for the big play was Bryant and they were adamant on not getting beat deep again.

There it is again, two deep safeties from the Patriots and once again, double the attention on Bryant. Watch how Bryant (right side of the offense) is passed off from the Patriots cornerback to the safety as he heads towards the middle of the field. The play is perfectly defended and forces Roethlisberger with no option other than to scramble for the first down.

Without Brown, the Steelers’ passing offense downgraded from elite to good. And while good may be enough to beat majority of the teams in the NFL, it will not hold its own against the Patriots. There’s no telling what would have occurred had Brown played a full 60-minutes but the tape tells us that Bryant would have continued to be a huge focus of the Steelers game plan.