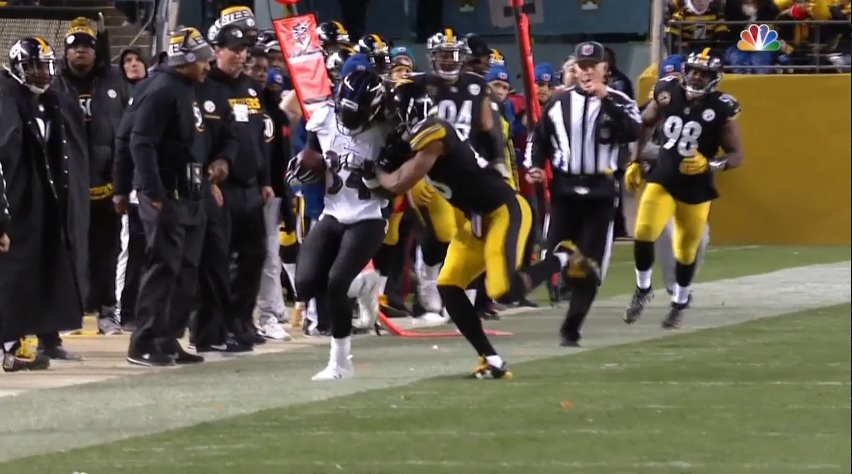 It’s been well known that the performance by Pittsburgh Steelers safety Sean Davis last Sunday versus the Baltimore Ravens was a rough one. We will take a closer look at Davis’s play and breakdown what went right and what went bad.

On the first offensive drive for the Ravens, Davis’s night started with a bang. As seen in the picture below on 3rd and 4, the Ravens are in an empty formation. The Steelers come out in a two-high safety look, with Davis over-top of the three receiver side. The Steelers are in Cover 2 which means the two safeties split the field in half over top. Cornerback Mike Hilton will actually be the deep middle/hole player who is responsible for any route in that area. 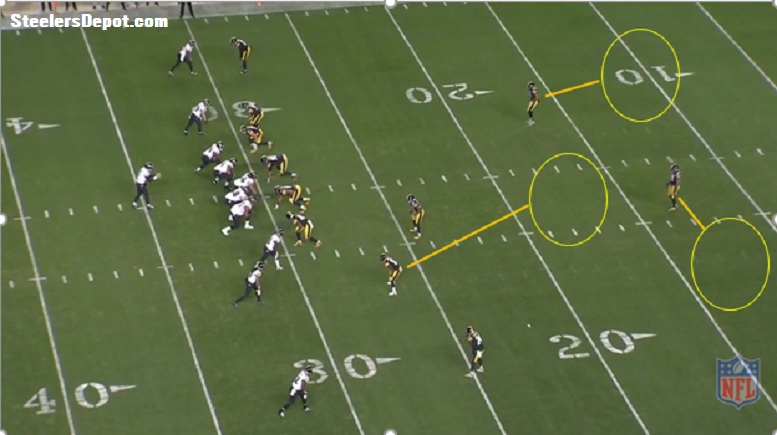 At the ball snap you will see Davis open up and begin working to get to his zone. He quickly realizes that he doesn’t have a threat to his zone and begins to look for work by squeezing the vertical route in the middle of the field and is able to under cut the route, making the interception. Hilton actually blows his coverage by going too far inside instead of getting depth and covering deep middle leaving Ravens wide receiver Jeremy Maclin open. This was a great heads up play by Davis.

In the second quarter on 2nd and 10 from the Steelers 30-yard-line, the Ravens once again came out in a empty formation only this time a 4-by-1 (4 receivers to one side and 1 receiver to other).  The Steelers call for cover 4 in which Davis’s primary read is the #3 receiver to #2 receiver. If the #3 receiver runs any route over 8 yards he has to take #3.  If #3 runs a short route Davis instantly looks to help on #2. 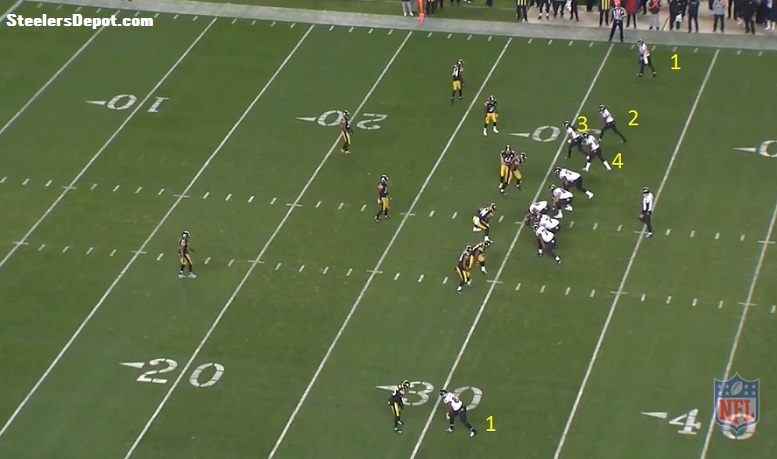 When the ball is snapped you will see Davis begin his back pedal and turn his head to make his read on #3 receiver. As the play unfolds Davis begins to look at quarterback Joe Flacco and at the same time slow his backpedal as he begins to stand tall, which prevents him from continuing to get depth. Because Davis’s eyes are at the quarterback, he neglects to see his primary read, Ravens wide receiver Chris Moore, who has reached 8 yards and is continuing to go vertical. By the time Davis realizes Moore is running a go route, he is already too late and thus unable to stay over top of the receiver and ultimately allowing the touchdown.

The concerning part watching this play, besides Davis not making his reads, is him neglecting his fundamentals. As a defensive back they constantly work on back pedaling and the transition to opening hips to run with receivers. As you can see in the gif, while back pedaling he begins to stand tall instead of having a bend in the knees with his chest over his toes which slows up his ability to get depth leading towards Moore blowing passed him for the score.

In the third quarter on 2nd and 8, the Steelers are again are in Cover 2, Davis and fellow safety Mike Mitchell are responsible for over top coverage, splitting the field in half.  A safety’s number 1 rule for over top coverage is not letting anyone behind them.  Davis becomes overly aggressive in thinking Mike Wallace was running a curl and tried jumping the route allowing the Ravens wide receiver to get behind him for longest pass play of the game for Baltimore.

From watching it live to reviewing the film it was an rough performance from Davis.  He totaled 3 missed tackles and 30 yards in penalties as well on two unnecessary roughness penalties. Davis has shown at times this season that he can play at a high level and the Steelers will need him to respond in a big way this week versus the Patriots.