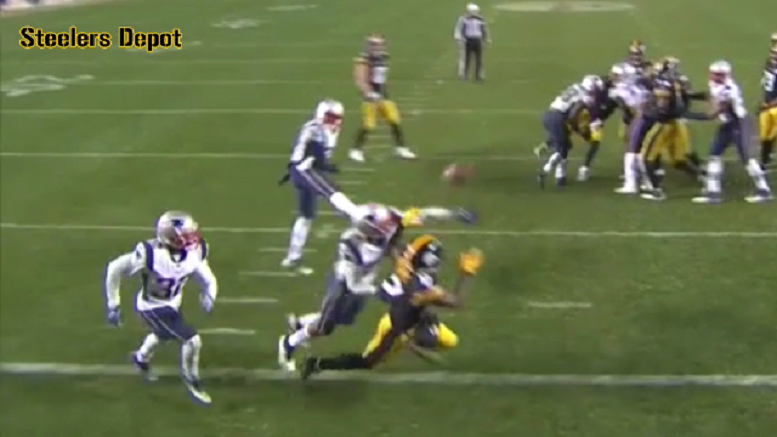 Even though most of you still aren’t over the overturned catch and touchdown by Pittsburgh Steelers tight end Jesse James late in Sunday’s loss to the New England Patriots, I will try to get your mind of that controversial ruling by giving you something else to be mad at.

On what would ultimately be the Steelers final offensive play of the game, the third down interception thrown by quarterback Ben Roethlisberger via a fake spike, wide receiver Eli Rogers seemingly had his jersey tugged by Patriots cornerback Eric Rowe, who ultimately deflected the pass away in the end zone that caused it to be intercepted by safety Duron Harmon. Rogers was asked about the play after the game.

“He definitely pulled my hip,” Rogers said of Rowe. “But they didn’t make the call and it is what it is.”

So what about the play and were he and Rorthlisberger the only two players on the field who knew there wopuld be a fake spike?

“Yeah,” Rogers said before later adding, “Ben just kind of looked at me and gave me a signal and we went from there.”

Had Rowe been flagged for either defensive holding or pass interference on that play then the Steelers would have likely just kicked a field goal to tie the game. Should’ve, Would’ve, could’ve, right?