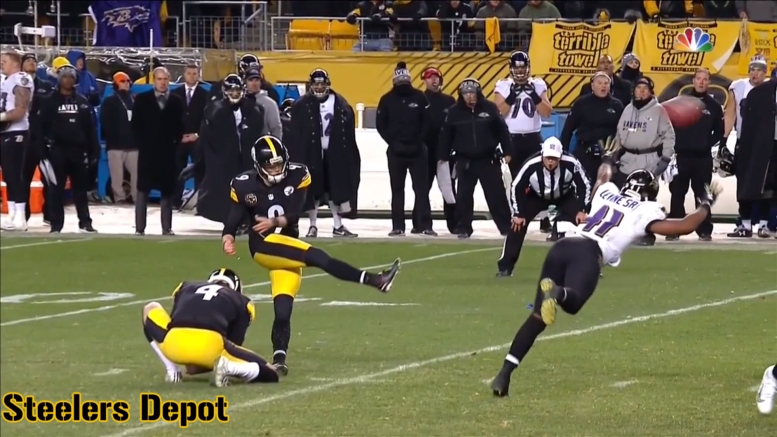 This is a question I was really hoping someone would ask. In today’s Coordinator’s Corner, Bob Labriola did. A few weeks ago, Mike Tomlin said the Steelers were challenging Chris Boswell to hit from 50 yards out. He’s responded, nailing two of them over the last three weeks, including a 53 yard game winner to beat the Green Bay Packers. Sitting down with special teams coach Danny Smith, Labriola asked him what challenging Boswell actually meant.

“You gotta practice those things,” Smith said via the team website. “Put him in those situations and practice him. Nothing’s too big for this guy. We just added more practice, worked it, it becomes a mindset.”

Kicker is one of the most mental positions on the field, where even a slight deviation from perfect technique can mean the difference between a make and a miss. Boswell has been one of the league’s most automatic kickers, connecting on 25 of his last 26 field goals. For the year, he’s hit 32 of 35, over 91%. That’s good enough for 7th in the NFL and third among all kickers with at least 30 makes in 2017.

A strong relationship between kicker and coach also helps. Smith said he has a great bond with Boswell.

“Boz and I have a great relationship. Boz and I have different things we go through week in and week out. We met on it this morning, as a matter of fact. We evaluate things. What we can do here, what we can do there, look at this, look at that. It all depends on who your kicker is and his mindset. This kid has a great mindset and we have a great relationship. There’s a lot of communication between us involved in everything on a daily basis.”

No matter how strong a kicker’s leg is, or how good he even looks in practice, it’s all about the ability to perform under pressure. Something Boswell has proven ever since he was signed, according to Smith.

“I call it a kicker with “game.” There’s a lot of strong-legged guys riding around these neighborhoods thinking they can kick…what separates these guys is execution under pressure.”

In a very strange way, Josh Scobee is the best thing that could’ve happened to the Steelers’ special teams. It led them to the man, the myth, the legend, Chris Boswell.