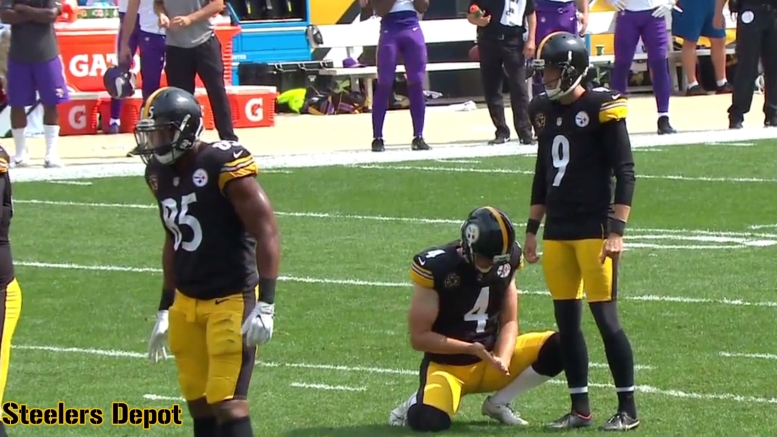 How about Chris Boswell? The Pittsburgh Steelers scraped him up off the street three years ago in the middle of the 2015 season, and now he’s setting team records. And he has been crucial of late for the team. Over the course of the past four games, the third-year player has secured three of those wins with last-second field goals.

Last night was just the latest, and the Steelers’ third game-winning drive of the season, connecting from 38 yards out as time expired to put Pittsburgh up over the Cincinnati Bengals and vault them to an AFC-best 10-2 record, keeping pace with the Patriots.

It should have been a 43-yard attempt with four seconds remaining, but Bengals defensive back Josh Shaw jumped offside, giving the Steelers five yards and making the kick, ostensibly, easier to make. Shaw completed the play, preventing the kick from being made, and it seemed he may have hit punter/holder Jordan Berry’s hand, but that wasn’t an issue on the eventual game-winner.

Boswell has not been perfect this season—not all of that has been his fault—but he has, over the course of his career, been ‘clutch’. This latest run is just the epitome of that trend. This game last night was similar to the first game following the bye, as well.

Through the first half of that game against the Colts, the offense was lethargic through much of the first half before finally getting a late field goal, as they did last night. But this time, they were trailing by 14 points at that point. It was in Indianapolis that this recent trend started, with Ben Roethlisberger and the offense giving Boswell the chance to win the game as time expired.

The Steelers gave him a week off from the clutch situations as they blew out the Titans in the following game, but it was another cardiac situation a week ago against the Packers. They had just 17 seconds to get into field goal range, and Boswell had to hit from 53 yards out, the longest of his career, for the win.

He hit it. Because that’s what he does. Or at least that is what he has been doing, so far, throughout his career. But it would not be something I would have much trouble getting used to.

During his three-year career, Boswell is now 77-for-87, connecting on 88.5 percent of his kicks. That is the highest percentage in team history, ahead of Shaun Suisham, who made 87.9 percent of his attempts in his tenure. It stands as the third-best all-time behind active kickers Dan Bailey and Justin Tucker.