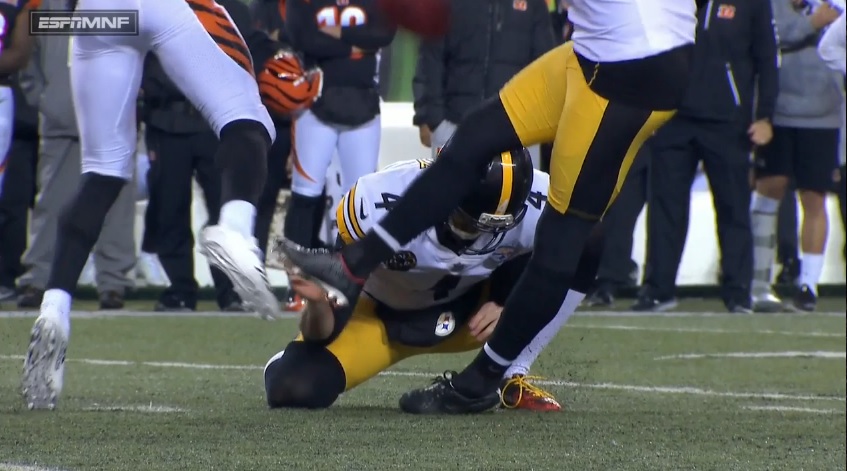 Chris Boswell kicked the game-winning field goal Monday night but even that came with controversy.  The Cincinnati Bengals went offsides, running into Boswell’s foot as he went to attempt a mock kick. Speaking with reporters today, Boswell says he thinks it was an intentional act.

“My foot smashing into his foot basically. It stung for a bit. But it didn’t affect the kick at all,” Boswell said via WTAJ’s Jamie Baker, whose video we’ll link at the bottom.

That was Bengals’ cornerback Josh Shaw getting in the way to prevent Boswell from getting his practice kick into the air. And to him, definitely intentional.

“It’s not an accident at all,” Boswell continued. “If you look over the NFL over the last two years, multiple teams have done it. Either it’s running into it, blocking the kick, doing something. Seattle did it last year against the Bills. The Ravens did it against us last year. And now Cincinnati.”

Take a look for yourself. No question Shaw sticks his foot out to block the attempt.

Boswell says it’s clear that for a player to jump offsides “that badly” there has to be intent to run into the kicker. He would be ok and make the now-38 yarder, giving Pittsburgh the win. He was named AFC Special Teams player of the week for his efforts.

Even field goals weren’t without controversy. That’s Cincy for you.

The Bengals jumped offsides prior to Chris Boswell kicking the game winning field goal Monday. Boswell thinks it was in tentional. "You're not jumping offsides that bad without trying to run into the kicker" pic.twitter.com/HeKIyP7k63