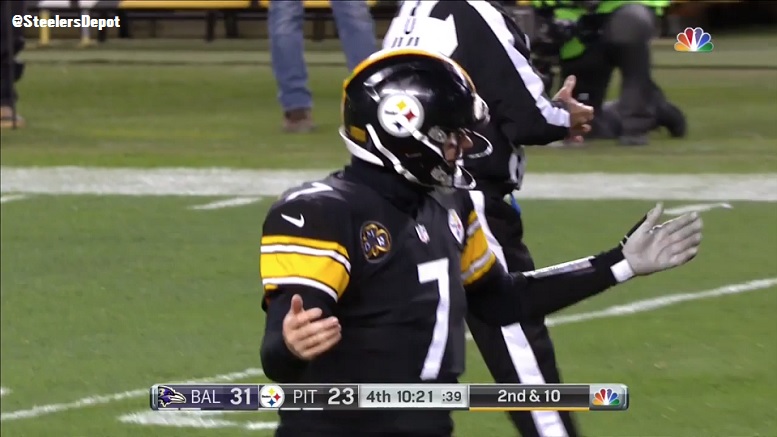 The Pittsburgh Steelers will host the New England Patriots this coming Sunday afternoon at Heinz Field and that game will officially mark the first time that wide receiver Martavis Bryant has played against the AFC stalwart. During his Tuesday morning appearance on 93.7 The Fan, Steelers quarterback Ben Roethlisberger was asked if he believes Bryant is ready for this opportunity on Sunday against the Patriots even though it looked like at times during the team’s most-recent game against the Baltimore Ravens that something didn’t seem quite right about the wide receiver.

“I do,” Roethlisberger said.

Because Roethlisberger somewhat side-stepped the initial question about Bryant, he was later asked during his interview if he senses that the wide receiver was locked in mentally, physically and emotionally Sunday night against the Ravens.

“Yeah, I felt like he was,” Roethlisberger said. “It’s hard for me to go back and remember, there was a lot of passes I threw. So it’s hard to go back and remember all the different plays, but I think we kind of got out early, he caught a couple early, he had at least one real big third down. I missed him on a couple of other ones. So, I just think it was one of those days that other guys maybe out-shown him, if you will, just because it just happened to be one of those days.”

Roethlisberger was more than likely asked about Bryant on Tuesday because of the reaction he had following an incompleted deep pass down the left side of the field to the wide receiver Sunday night against the Ravens. On that particular play, it appeared as though Bryant let up a little during his route and that he really didn’t fight hard to get on top of the Ravens cornerback who was covering him on the play.

After that pass dropped incomplete, it looked like Roethlisberger wasn’t very happy with the effort given by Bryant on the route. With that said, Roethlisberger could have been unhappy about something else that happened during that play. The optics, setting, and recent history, however, easly lead one to speculating that he wasn’t happy with Bryant.

That one play aside, Bryant did end up catching six passes against the Ravens for 33 yards on 10 total targets and that’s the most receptions he’s had in a single game this season. Additionally, Bryant is currently the Steelers primary kickoff returner and there’s been no indication that he’ll lose that role in Week 15 despite having a shaky performance Sunday night against the Ravens as a returner.

“We’ll keep working,” Steelers head coach Mike Tomlin said Tuesday during his weekly press conference when asked how he plans on going about helping Bryant improve at fielding kickoffs more cleanly. You guys wondered why you hadn’t seen him before recent weeks, now you know. We’ll keep working. It’s been a nice shot in our arm. It’s provided something else for other people to defend. It’s been a way of getting him the ball a little bit more. We’ll keep working and see where the road leads us.”

It sure would be nice to see Bryant have a big game against the Patriots and that very thing might ultimately be needed for the Steelers to win at home Sunday afternoon. One would think that the Patriots will do their best at not letting fellow wide receiver Antonio Brown kill them the way he killed the Ravens Sunday night. In short, Bryant should have quite few opportunities to make some plays during his first game against the Patriots.

“Maybe this will be a coming out party for him against a good team,” Roethlisberger said of Bryant.