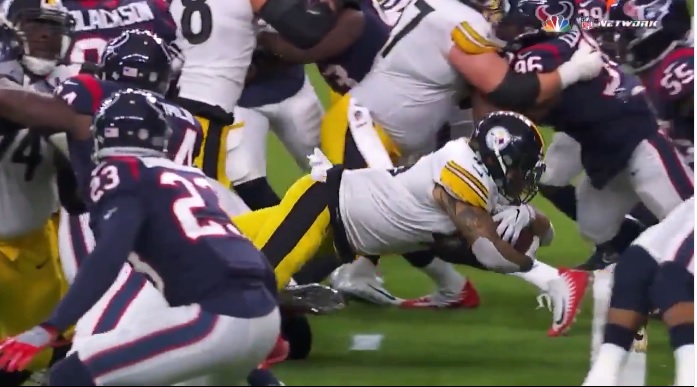 The Pittsburgh Steelers were having no part of a post New England hangover, instead converting their recent heart-breaking loss into an aggressive beatdown on the Houston Texans. The Steelers coasted to a 34-6 victory over the Texans, relying on countless superstars to aid the loss of wide receiver Antonio Brown.

JuJu Smith-Schuster did his best Brown impression, catching passes from Ben Roethlisberger in all phases of the field. Smith-Schuster role ranged everywhere from a deep target to over the field threat, finishing the day with 74 receiving yards and a late touchdown. Martavis Bryant also chipped in as well, catching three passes for 60 yards.

Practice phenom Justin Hunter also helped chip in for Brown’s absence, catching his first touchdown pass of the season, giving the Steelers an early 10-0 lead. With Brown out, Roethlisberger connected with six different receivers on route to 225 yards passing and two touchdowns.

The Texans pressured early in the second quarter, rushing for 75 yards down to the Steelers’ one-yard line. After three consecutive stops by the Steelers defense, the Texans elected to go for it on fourth and goal, only for T.J. Yates’ pass to be intercepted by cornerback Artie Burns.

Burns’ interception led to the second Steelers touchdown which also came from an unusual candidate as Roosevelt Nix plunged in from the one-yard line to give the Steelers a 17-0 lead.

The Texans and Yates had little success throwing the football as Yates had thrown for just eight yards before being replaced by fourth string quarterback Taylor Heinicke.

Heinicke would not last long as he was removed from the game with a possible concussion, leading the way for Yates to return. The duo of quarterbacks were sacked seven times with Mike Hilton grabbing three sacks and Cam Heyward notching two sacks. Heyward’s two sacks gives him 12 on the season, the most for any Steelers since LaMarr Woodley finished with 13.5 sacks in 2009.

While the Texans found themselves unable to utilize the passing game, they were able to gouge the Steelers run defense, running for over 175 yards. Stopping the run has been a huge cause for concern for the Steelers ever since losing linebacker Ryan Shazier.

Like the Texans, the Steelers too were able to utilize their running game on route to their third touchdown of the night. Le’Veon Bell weaved his way through multiple defenders to score a 10-yard touchdown, giving the Steelers a 27-0 lead. Bell would finish the day with 69 rushing yards and 28 receiving yards.

In his first game in over six weeks, Joe Haden was faced with a tall task in guarding the one of the NFL’s top wide receivers in DeAndre Hopkins. Haden did more than a fair job guarding Hopkins, allowing just four catches for 65 yards. Hopkins also scored an incredible, catch of the year worthy touchdown over Haden early in the fourth quarter. Hopkins’ catch would be the Texans only points of the evening.

Now with a first-round bye guaranteed, the Steelers will return home to wrap up their season against the Cleveland Browns next Sunday at 1 p.m. The Steelers are still expected to dress their starters as a Steelers victory plus Patriots loss next week would lock up the first seed.