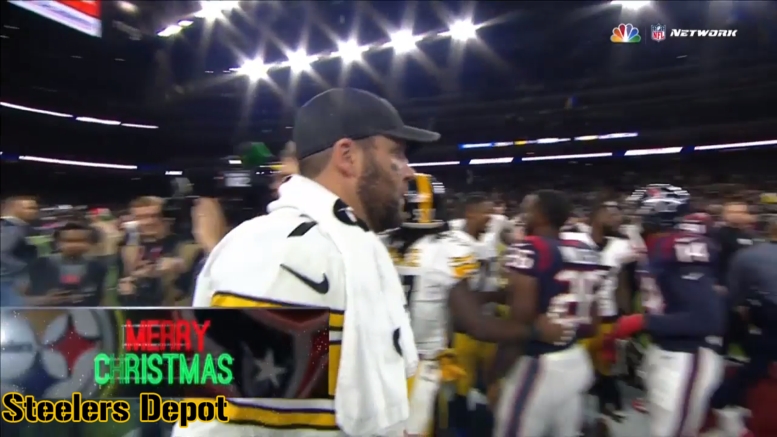 You know, Christmas may have been quite good to the Pittsburgh Steelers over the course of the past two years…but it doesn’t make me any happier that the league forced the team to play on Christmas Day two years in a row.

While it is not a scenario that likely comes up very frequently at all, for games to be played on Christmas Day two seasons in a row, no team in the history of the NFL has ever had to play on the day two years in a row. I took umbrage with that when the schedule first came out, and it still bothers me.

On a personal level, it caused some internal—as well as external—debate over whether or not I should—or could afford not to—work the game. Especially being an evening rather than afternoon or night game, it badly conflicted with my plans, and I had to choose not to work the game.

That is why I was not with you yesterday, in case you didn’t notice. I was visiting relatives in multiple locations, though I did get an opportunity to watch most of the game live—or on DVR—in between having Christmas dinner and exchanging presents with family.

To think of myself only is not the point, of course. There are so many families that are affected by asking a team to play on Christmas. And a year after playing, the league had the Steelers travel halfway across the country to play again on the same holiday, making it even worse.

The players and coaches are not those for whom I’m concerned. They’re well-compensated for their time. But there are plenty of blue-collar and white-collar workers that are also an integral part of making the wheels of the league turn on a daily basis who had to have their plans altered by necessity.

Now, as I wrote about back in April when the schedule came out, the Steelers are certainly not the most-burdened team of all time on this day. In fact, the past two seasons are the only times in their history that they have played on Christmas.

In comparison, the Cowboys have done so five times—losing three. Five other teams have also played on the day at least three times. But, again, none of them have ever had it happen to them in consecutive seasons, and I’m hoping that the league never does that to another team again. It’s unfair.

Now, with that out of the way, it’s hard to deny that playing on Christmas has been exceedingly good for the Steelers on the field. Last season, they clinched the AFC North title in epic comeback fashion. Just yesterday, they clinched their first bye week since 2010, and did so with a blowout.

The winning definitely makes is much more palatable, but I hope to never have to choose between celebrating a holiday at all versus carrying out my obligations elsewhere.