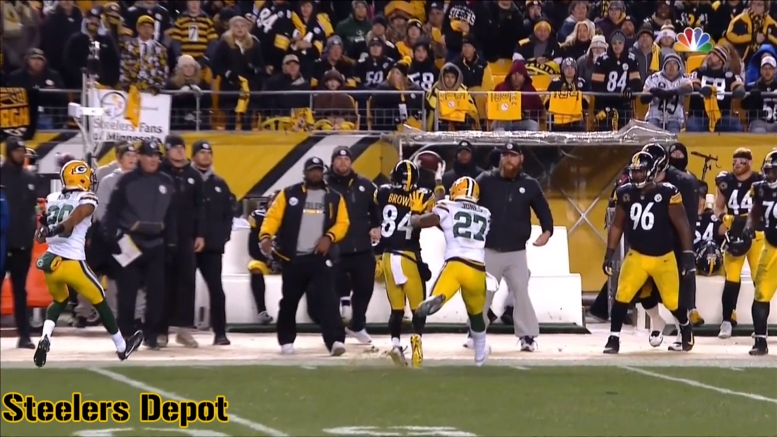 There was so much to take on last night over the course of just a few hours in a game that ran the gamut of emotions from tragedy to jubilation, and a good dose of anger and frustration in between, but one of the big stories about what happened on the field in Cincinnati was the play of Pittsburgh Steelers wide receiver Antonio Brown.

Ordinarily, this would be business as usual, but Brown game into the game questionable to play, nursing a sprained toe, and was a game-time decision. There’s no way he played at 100 percent—I think his two dropped passes is a strong indication of that—but he came through and helped lift the Steelers over the Bengals, yet again.

The All-Pro finished the game with another eight receptions for 101 yards and a touchdown. He has gained at least 100 yards through the air with at least one touchdown for three consecutive games now. He fell just two receptions shy of tying Chargers wide receiver Keenan Allen, who a day earlier became the first player in NFL history to post a stat line of 10-100-1 or better in three consecutive weeks.

During that span, however, Brown has 28 receptions for 414 yards and six touchdowns. He now has 88 receptions on the season for 1296 yards and nine touchdowns, now leading or tied in all three categories. His ninth reception tied him with the Texans’ DeAndre Hopkins for the league lead.

With 88 receptions, on pace for 117 on the year, Brown has six more than Larry Fitzgerald at 82, and eight more than Jarvis Landry. His 1296 receiving yards tower over Hopkins’ 1084 by 212 yards. Only five receivers have reached 1000 yards so far. He came into the game leading the league with 20 explosive plays, and he added two more during the night.

Toward the end of the game, Brown converted a big second and 16 at the Steelers’ 34-yard line on a deep pass that picked up 24 yards. After dropping a pass, two plays later, Ben Roethlisberger found him in the back of the end zone for a six-yard touchdown as he took a shot to the head, holding on to the ball, tying the game.

Considering the fact that there was some pessimism about whether or not he would even play—a couple of us here even thought it might be advisable to rest him, especially on a short week heading into Sunday Night’s game against the Ravens—the performance that he turned in was not far short of exceptional.

With four games remaining, Brown has already gained more yards than he did a season ago in 15 games, though he still has a way to go to catch up in the total receptions and touchdowns. And as I would like to continually mention, his yards per reception of 14.7 yards is impressive for a player with his volume of work.