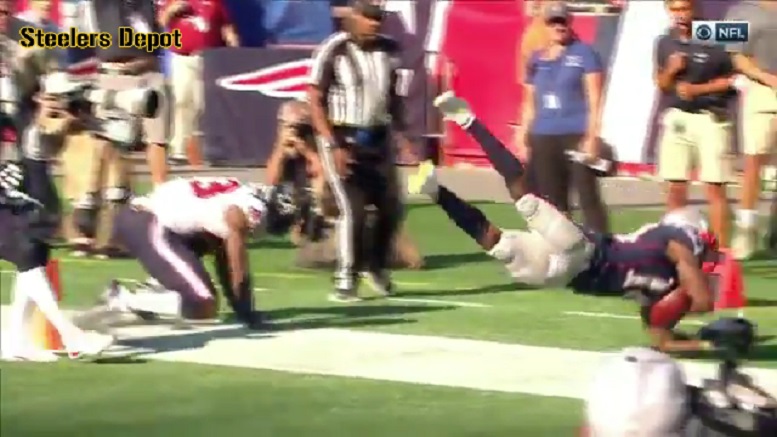 After a review of the Cooks score, the play stood and a lot of people at that time wanted to know why that was being as the football moved in his arms on his way to the ground after hopping following him getting both feet down in the end zone. As you can probably imagine, Al Riveron, the NFL’s Senior Vice President of Officiating, was asked about the ruling of the Cooks touchdown.

“He’s established possession,” Riveron told SB Nation shortly after the September game. “While he has possession, he has two feet down. The last part is, is he able to perform another common act? In this situation, he must complete that part of it or he’s still going to the ground.”

Here is the rest of the relevant partt of that story:

Riveron referenced “common act” because, in the end zone, Cooks can’t necessarily “become a runner.” The better question is to ask, did he walk away from the toe-tap? Clearly not.

Since Cooks didn’t complete a common act like running, walking or stepping, he then had to hang onto the ball throughout his fall. And no, a “hop” is not considered an act common to the game.

The veteran Cooks did in fact maintain possession of the ball, and the Patriots escaped with the win.

Some Texans fans will point to the fact that the ball moved when it hit the ground. This does not negate a catch. Cooks clearly still controlled the ball with his hands, despite the ball shifting a little. If he had lost his grasp on the ball, this would have been incomplete. Because he maintains the ball in his possession, a little movement of the ball doesn’t negate the completion.

Ok, Ben Austro of Football Zebras does a little better at explaining why Cooks’ catch stood after review:

Late in the game, the winning touchdown for the Patriots was a pass from Tom Brady to Brandin Cooks. Cooks secured the ball in the air and tapped both feet in the end zone before he fell to the ground out of bounds.

The two feet were clearly in the end zone without much deliberation, but replay intervened to take a second look. Initially, it looked like Cooks may have caught the ball while upright and then hopped out of bounds; however, Cooks being off balance caused him to fall out of bounds. Because he was was “going to the ground”, he must maintain control throughout the process of the catch. In other words, if he is deemed to be going to the ground, he must “survive the ground”.

The second and third angles of the video show that the ball hit the ground in Cooks’ arms. The ball moved, but a slight movement of the ball is not considered a loss of possession. Since Cooks did not lose control, the catch was confirmed in replay.

Why was James’ touchdown catch overturned? Riveron explained in a video after the game was over.

Like it or not, James lost control of the football and it hit the ground in the process. Unlike many of you, I think the right call was actually made after the review due to my complete understanding of the rules. Does this make the rules right, or easy to understand? Absolutely not and something needs to be done about that in the near future because for the most part, people dont consistently have a great grasp on what is and isn’t a catch and that makes the game hard to enjoy at times.