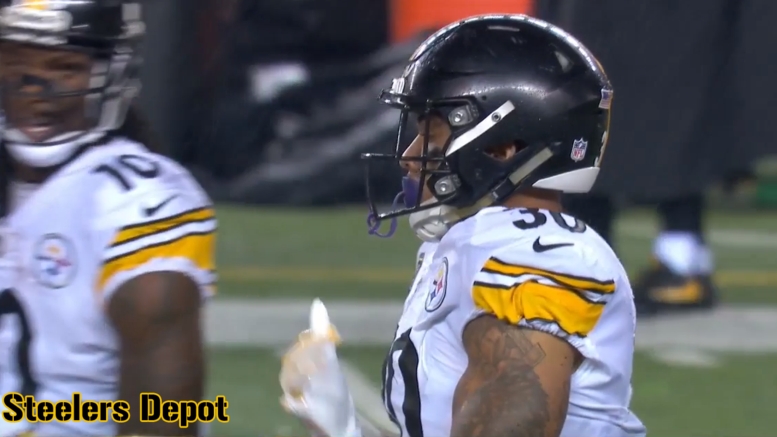 Question: How would you grade James Conner’s rookie season, and how does it make you feel about his future?

He wasn’t exactly Alvin Kamara or Kareem Hunt, but given his relatively minute workload, Steelers third-round rookie running back James Conner had a pretty productive rookie season. While he only got 32 carries over the course of 14 games, he turned them into 144 rushing yards, and that included six carries of 10 or more yards, with one explosive play.

He also contributed as a blocker on the kick return team, and late in the season briefly had a role on kick coverage, but he was not much of a contributor in the passing game. He was only targeted once on a busted screen play, and his work in pass protection was shaky.

Of course, the Steelers’ primary interest in Conner is his ability to carry the ball, and he clearly showed potential in that regard. With nearly 20 percent of his carries going for double-digit yardage, he showed a surprising explosiveness to his running style that actually shouldn’t be all that surprising if you look at his college numbers.

It was obvious that Conner was going to have a light workload this year behind Le’Veon Bell, who is the premiere workhorse of this generation, bar none. Simply nobody else comes close to playing the percentage of snaps that he does when he is dressed to play.

I am a bit concerned about the frequency with which he got nicked up in his limited workload. He seemed to have suffered a bump or bruise four or five times this year. And he clearly has some work to do in his game. But obviously he can be a contributor. A featured back? I’m not sure.