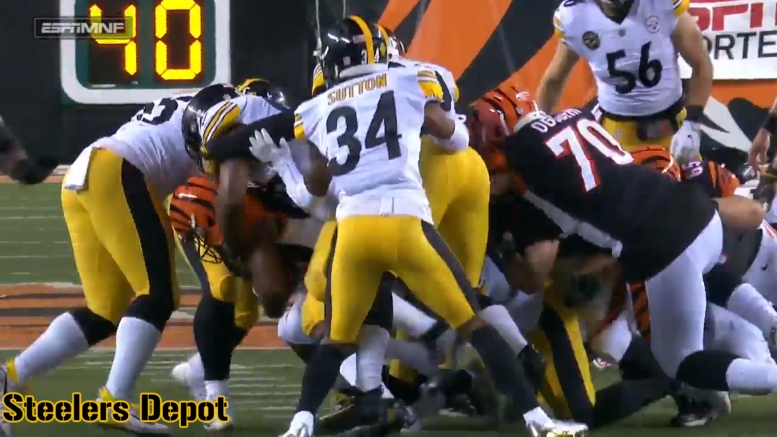 Question: Game Edition – How do the Steelers approach the left outside cornerback position?

This would seem to me a question of noteworthy significance, since, you know, a starting cornerback position is a pretty big deal, and the Steelers demonstrated last week that they are not entirely comfortable with the performance level at one of their two spots at the moment.

At least for another week, anyway, as there is some cautious optimism that their actual starter, Joe Haden, could potentially return to practice this week. And he said that he can play soon after he practices. So if he practices and there are no setbacks, he could return to face the Patriots.

But that doesn’t do any good this week. Artie Burns will be on the right side, and Mike Hilton will be in the slot, but who will be on the left side—or perhaps, how many?

During last week’s game, Coty Sensabaugh started the game, but he was benched during halftime, replaced by rookie Cameron Sutton, making his NFL debut in any context. He manned the left outside cornerback slot throughout the second half, giving up a 27-yard reception on third and 16. He also had a 61-yard touchdown negated by a holding penalty, but you can see my film study for my thoughts on his debut.

Sutton confirmed that both he and Sensabaugh were taking first-team reps in practice this week, so I don’t know that there is any decision that was pre-determined. It is entirely possible that they utilize a rotation of some kind, or play the hot hand—or bench the cold hand—as the game goes on.

One option they don’t appear to have ever pursued was the put William Gay on the outside, even though he was a starting outside cornerback as recently as early last season. It seems to be Sensabaugh and Sutton until Haden returns.