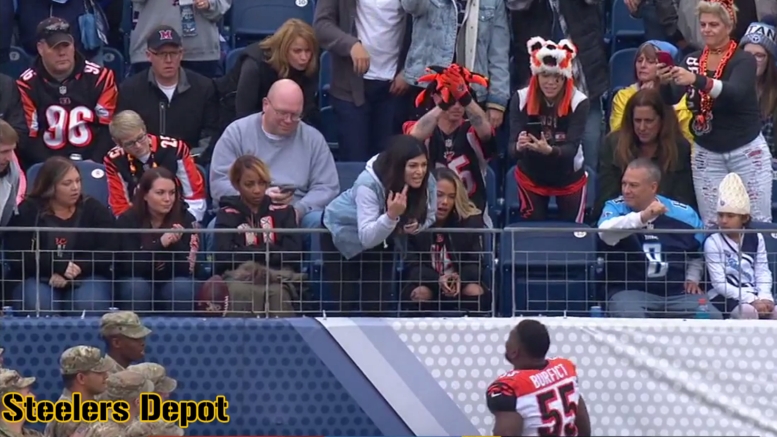 So as it turns out, not only was Cincinnati Bengals middle linebacker Vontaze Burfict not suspended following his ejection for contact with an official in the team’s Sunday loss to the Titans, ESPN reported that he did not even receive a fine for it. The league evidently decided that the ejection was punishment enough.

According to an article from Pro Football Talk, $30,387 is the minimum fine for “contact with an official”, which he clearly had. After something of a dogpile out of bounds near the goal line, a side judge stood in front of Burfict, seemingly to hold him back from entering a confrontation. At some point, the linebacker shoved the official’s arm out of the way. He was immediately flagged and ejected for that.

Earlier this year, Raiders running back Marshawn Lynch was both ejected and subsequently suspended for contact with an official, which was admittedly more egregious than what Burfict did, essentially pushing the official, though he may not have been entirely aware the was shoving an official at the time during a heated moment.

Even his head coach, Marvin Lewis, has said after this most recent incident that Burfict has to be smarter. He even denied prior claims from his players that officials have attempted to provoke him; or at least he said he would be “shocked” if that were true.

But the linebacker himself also contended that officials are targeting him, and even attempting to goad him.

“The refs, they come up to me, talking to me disrespectfully, wanting me to curse back at them, but me cursing back at them isn’t going to help me”, he told reporters on Friday. “I’m not going to get a flag in my favor next time around, but that’s the way they handle business, I guess. I told Coach I’m just going to try to stay out of the refs’ way”.

Regarding his interaction with the official, Burfict acknowledged that he understands he can’t touch an official, but said, “I didn’t think I touched him maliciously at all. I pretty much said, ‘excuse me’”.

He also said that he believes that if players are not allowed to touch officials, that officials should also be barred from touching players. He cited the fact that football is a game of physicality, and that in the heat of the moment, if somebody is touching you, it could trigger a confrontation.

To be fair, if Burfict’s account is true that officials are actually actively making comments toward him, which essentially amounts to harassment, then that is unreasonable and unfair behavior on their part. Considering that they are wired for audio during the game, however, one might think that we could have some knowledge of fact on this matter.