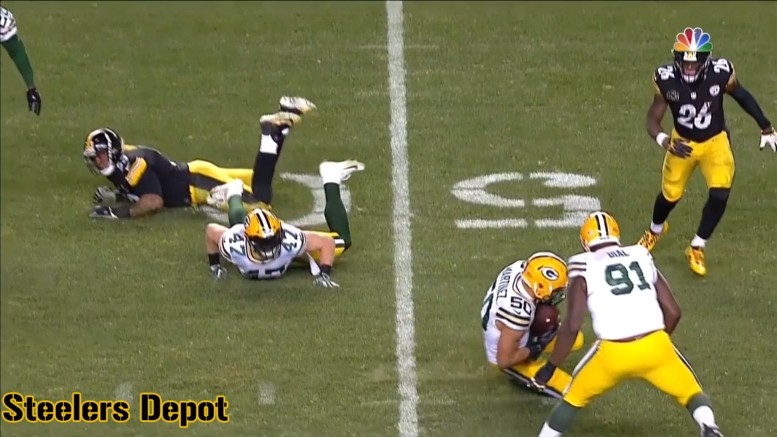 The Toxic Differential is a statistic that we take pretty seriously around here, even if we don’t talk about it a whole lot. It’s pretty simple, really. The basic idea behind it is that the more giveways you have than takeaways, the more explosive plays you allow than produce, the more likely you are to lose the game.

Based on the Pittsburgh Steelers’ Toxic Differential last night, their win was fairly improbable. While both sides evenly produced three explosive plays, the Green Bay Packers were able to produce three takeaways while not giving the ball up at all.

That netted them a plus-three differential, which is very strongly correlated with wins. You can do a Google search and easily find a number of articles that demonstrate the correlations between a differential of two or more and victories. When you go beyond three, the winning percentage gets even higher.

It’s hard to win a game when you turn the ball over three times while not getting any back yourself. Which is a large part of why it took the Steelers a field goal as time expired to ultimately close out the 31-28 win.

Even though the Packers only got seven points off of their three turnovers, which also included a missed field goal that, from 57 yards out, was frankly ill-advised, those two interceptions and the fumble lost killed drives that could have scored points.

The first interception came late in the first quarter with the Steelers at their own 49-yard line. Ben Roethlisberger was facing third and eight when was intercepted by Damarious Randall, who was able to jump in front of a pass intended for Eli Rogers.

Later in the game, on the opening possession of the second half, Roethlisberger’s pass on second down, again from the 49-yard line was batted up in the air by linebacker Ahmad Brooks, which was then subsequently intercepted by Black Martinez.

The worst one, in terms of circumstance, was the Le’Veon Bell fumble. He lost the ball at the Packers’ 35-yard line after picking up five yards on second and nine. The defense was able to forced a three and out, but they ended up losing 33 yards of field position because of it.

Of course, all of that even would have been find if they could have just prevented the big plays, all three of which produced touchdowns. Both Artie Burns and Coty Sensabaugh were beaten for long touchdowns, the latter part of the phrase being allowed by bad tackling after the fact.

Couple that with a screen pass to Jamaal Adams on third and five that went for a 54-yard score, and you have your Toxic Differential. Antonio Brown matched with three explosive plays of his own, one of which produced a touchdown, yet all of which helped them score.

Meanwhile, there is no excuse for the defense not being able to produce a turnover from backup quarterbacks and running backs combined. Nor for giving up so many big plays. Nor for the offense giving up three turnovers. All of these factors combined nearly cost the game, but they defied the odds.