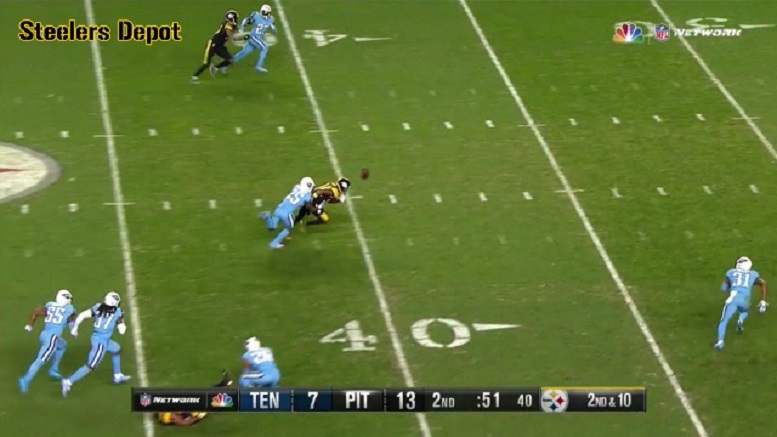 Did the Pittsburgh Steelers catch an officiating break late in the first half of their Thursday night game against the Tennessee Titans? It certainly appears that way and Titans head coach Mike Mularkey certainly wasn’t happy after the game ended about what transpired following a fumble by Steelers wide receiver Antonio Brown with less than one minute remaining in the first half.

During the Steelers final drive of the first half, quarterback Ben Roethlisberger connected wide receiver Antonio Brown over the middle on a second down and 10 play for a big gain into Titans territory. However, as Brown looked to gain additional yardage after making the catch, Titans cornerback Adoree’ Jackson caught him from behind and poked the football out of his hands for a fumble. The loose football went bouncing forward 10 yards and the Steelers caught a huge break when fellow wide receiver Martavis Bryant recovered it at the Titans 32-yard-line. The referees then marked the football where Bryant recovered it and Roethlisberger quickly got the offense up to the line of scrimmage and spiked the football with 32-seconds remaining in the half.

According to NFL rules, if an offensive player fumbles the football after the two-minute warning in a half, or on fourth down at any time during the game, only the fumbling player can recover it and advance it. If that player’s teammate recovers the loose football in those situations, it should be placed back at the spot of the original fumble, unless it was a recovery for a loss. This rule was put in place in 1979 thanks to the infamous “Holy Roller” play early during 1978 season.

After the game was over, Mularkey was asked about the botched spot of the football following the Brown fumble and subsequent Bryant recovery

“No. The spot was not correct,” Mularkey said. “The spot cost us a field goal. It cost momentum. It cost a lot of things.”

The incorrect spot indeed ultimately worked against the Titans as the Steelers offense failed to advance the football any further down the field in their two post-spike plays. That resulted in Steelers kicker Chris Boswell attempting and making a 50-yard field goal with 23-seconds left in the first half. Had the football been spotted where Brown originally fumbled it, Boswell would have unlikely been sent out to attempt a 60-yard field goal had the offense failed to move the football.

Mularkey talked about the conversation he had with officials about that call and admitted that his previously quotes might result in him being fined by the league.

“No, I didn’t argue with them. They agreed it was the wrong spot,” Mularkey said. “I’ll be in trouble for that, but you know what, that’s the way it is. Say it like it is. Quit hiding things. It was the wrong spot, and it made a difference. We lost three points because of it.”