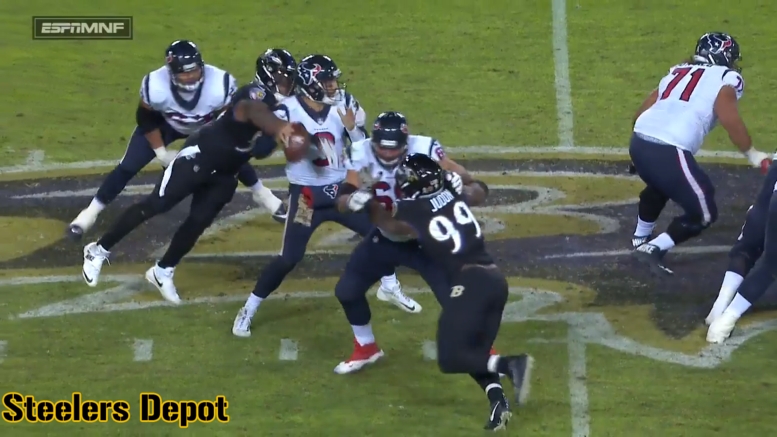 There are few players that Pittsburgh Steelers fans hate more in the NFL right now than longtime Baltimore Ravens outside linebacker Terrell Suggs. Maybe Tom Brady. Of course, the Cincinnati Bengals’ dynamic duo of Vontaze Burfict and Adam Jones. Maybe a few others, depending on individual tastes.

But I don’t think there’s any player we love to hate more than Suggs, who is truly the Ravens’ James Harrison, minus the underdog background. A first-round pick in 2003, the man is, frankly, still doing it after all these years, having turned 35 years old, and among the older starting defenders in the NFL.

Through 11 games this season, he has nine and a half sacks on the year after posting two last night against the Houston Texans, bringing down quarterback Tom Savage for a pair of quarterback takedowns, one of which went for a loss of eight yards. The second sack came in the middle of the fourth quarter in a four-point game, the Texans facing a first and 10 in Baltimore territory.

Once again, Suggs dropped the former Pittsburgh and Rutgers quarterback for a loss of eight yards, but this time it also came with a bonus strip. Savage lost the ball, which was recovered by Willie Henry, a young Ravens defensive lineman who has, as an aside, really begun to blossom.

That was his fourth strip sack of just this season, and his 30th for his career. Only five players have recorded more since he entered the league, according to the team’s website, which also noted it is the 26th time in his career that he has recorded more than one sack in a game.

“He’s Ponce de Leon – you should put that on the back of his jersey. He’s found the Fountain of Youth”, his head coach, John Harbaugh, said of him after the game. “He’s playing as well, or better, than I’ve seen him ever play since I’ve been here”.

While that might be a bit of hyperbole, his stats this year can’t be denied. He has 31 tackles, the aforementioned nine and a half sacks, four forced fumbles, and three passes defensed, with five more games left to continue to add on to his total.

Suggs now has nearly 800 tackles in his career, with 124 sacks, seven interceptions, 53 passes defensed, and 34 forced fumbles. To put his sack total in perspective, he just passed Simeon Rice and Robert Mathis on the all-time list, with Dwight Freeney in his sights two sacks in the future.

He owns the 18th-most sacks in NFL history. Compare that to Harrison, whose 82 and a half career sacks, the most in Steelers history (and that includes two sacks with the Bengals, by the way), ranks just 57th all-time.

Terrell Suggs is a player whose greatness, I feel, is a grudge for Steelers fans to admit, and to accept. The fact that he is on the verge of a double-digit season at 35 is remarkable. How much longer can he go? “As long as I’m healthy, I can be Sizzle”, he said. And that is after overcoming an Achilles tear two years ago—the second in his career.