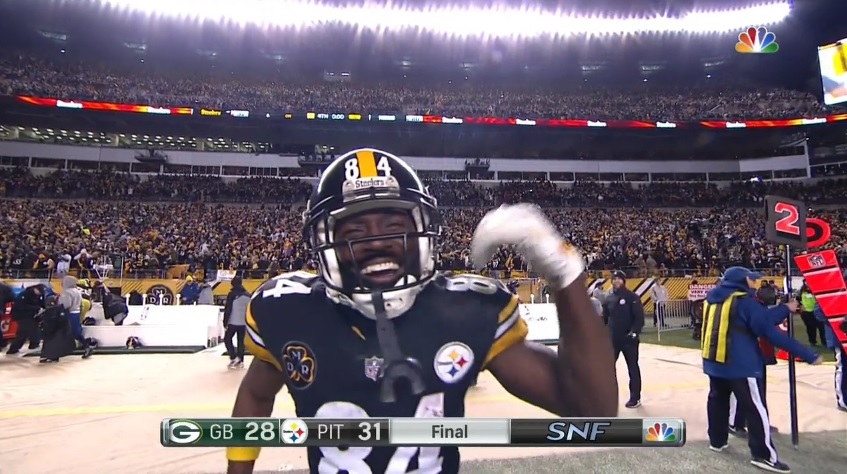 This team man. It’s something else. That’s mostly a good thing. Good enough for a win. Your Pittsburgh Steelers winners and losers.

Antonio Brown: Mama, there goes that man again. What more can you say about him? If you don’t think he’s the best receiver in the league, slap yourself silly. 10 catches, 169 yards, two touchdowns. And his toe tap on the final drive was absurd even by his standards.

Ben Roethlisberger: Feel free to debate which game was better. This week or lasts. Either way, they were spectacular. Roethlisberger repeatedly made big throw after big throw and showed accuracy hitting guys on the move. Even ran the ball for 25 yards. These are the kind of games he’ll need if the Steelers want to win a Super Bowl.

Cam Heyward: Pro Bowl. All-Pro. All the accolades. Heyward is worthy. Two sacks, nine on the year, to set a career high and lead the team. Couldn’t be blocked in the run game or contained as a pass rusher. And to me, he’s the heart and soul of the defense.

Chris Boswell: We love you, Boz. Made up for an early extra point miss with the game-winner from 53 yards out. Bingo. Boswell.

T.J. Watt: Not the most dominant performance but he was facing an excellent left tackle. Made noise in run defense, coverage (as good today as it’s been all year) and a “coverage” sack where he stormed in to take Brett Hundley down.

Le’Veon Bell: True, he did have the costly fumble and that’s become a pattern for him. But beyond that, Bell was excellent. Creating, making people miss, his usual work in pass pro, and hauling in a whopping 12 passes. He bailed the Steelers out of several second and long situations. His game can be better. But even when it’s a notch below, it’s better than nearly anyone else.

Red Zone Offense: Credit the whole lot for their success. Steelers came into today with the 31st ranked red zone offense. Walk away from it 3-3. To be fair, the Packers were as bad defending it as the Steelers were executing. But Pittsburgh came out on top.

Vince Williams: Not a “loud” game but VW is so steady against the run and was one of the surest tacklers on the field tonight. Packers were held to 3.3 yards per carry. Williams is coming into his own.

Artie Burns: Yeah, that was bad. I don’t know how Burns looked so bad on the first touchdown. Said it before and I don’t think I’ll get anyone to disagree with me tonight. Most frustrating player on this defense. He wasn’t alone but he’s the guy I trust the least. And though he does well to come to balance, he struggles to wrap up.

Coty Sensabaugh: Less egregious but he got burned on a double-move for another touchdown. All the corners, even Joe Haden, have had trouble keeping a lid on things. And it’s getting really bad. Has to get cleaned up.

Eli Rogers: Rogers did come through with one clutch third down catch and to his credit, his effort as a blocker has been top notch for the last three weeks. But man, you feel the effects of not having JuJu Smith-Schuster out there. Rogers has a smaller catch radius, worse hands, and doesn’t make those contested catches.

Bud Dupree: While Watt made plays elsewhere, Dupree’s calling card is as a pass rusher. And he’s been quiet for too long. Run defense isn’t terrible and he runs hard to the ball but yeah, he’s gotta at least win cleanly once in a game like this.

Jordan Berry: 32.3 yard average on three punts, including a 28 yard dud when the Steelers booted it late in the fourth. Junior varsity stuff, as Mike Tomlin would say.