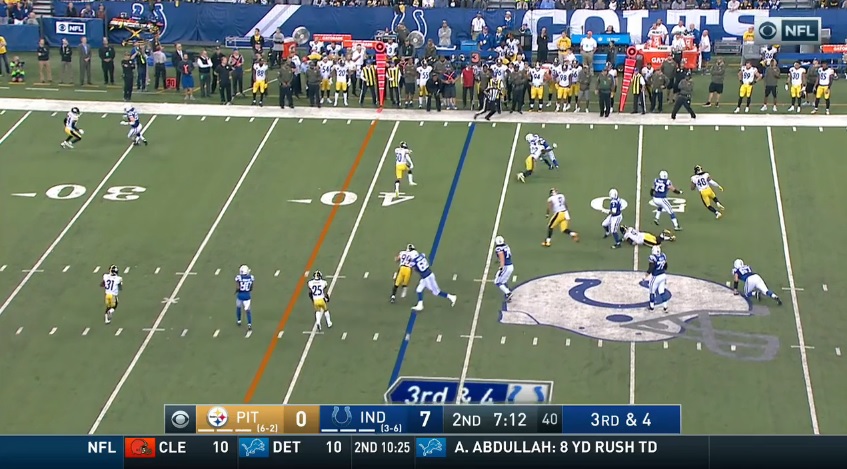 One week after a much-needed bye week, the Pittsburgh Steelers picked up right where they left off in the tackling department:  struggling.

After a 15-missed-tackles performance on Sunday Night Football against the Detroit Lions in Week 8, the Steelers came back in Week 10 on the road against the Indianapolis Colts and proceeded to miss 20 total tackles, good for the second-worst performance of the season.

That includes a first half in which the Steelers missed 13 tackles as a team, trailing 10-3 at the half.

Well, that number sure looks ugly for Ryan Shazier and Mike Hilton, doesn’t it? A combined 9 missed tackles from two of the better defensive players this season for the Steelers is concerning coming off the bye, especially when you factor in that Shazier missed 4 tackles in the first half and said following the game that it didn’t really feel like game day.

Through 10 weeks – 9 games – the Steelers are on pace to finish with 208 total missed tackles on the season, since they’re averaging right around 13 misses a game. It’s unlikely they crack the 200 mark, but the tackling has gotten worse the last two weeks. With some big games coming up, expect those miss numbers to fall below 10 a game again.

Let’s take a look at some of the most egregious misses from Sunday’s game.

The first bad miss comes early in the second quarter with the Colts facing a 1st and 15 from deep in their own end of the field. Shazier does a great job of knifing through the Colts’ line to get into the backfield for a clean shot at rookie running back Marlon Mack, but the veteran linebacker fails to get the elusive rookie to the ground.

What should have been a 6-yard loss turned into an 8-yard gain because Shazier failed to make the initial stop, which then led to misses from rookie linebacker TJ Watt and second-year safety Sean Davis in the open field.

I liked Mack a ton coming out of South Florida and he seems to have landed in the perfect spot with the Colts, but there’s simply no excuse for Shazier’s miss in the backfield like this.

Later on within the same Colts drive, Mack again forces some big missed tackles behind the line of scrimmage, this time picking up a key third-down conversion.

Facing a 3rd and 2, Colts quarterback Jacoby Brissett faces initial pressure from Cameron Heyward in the pocket, forcing him to slide right and dump the ball off to a stationary Mack well behind the line of scrimmage. Following the catch, Mack should be brought down for a 4-yard loss by veteran cornerback William Gay, but Gay comes up with a big missed tackle behind the line.

Gay’s miss then leads to another miss by Shazier near the line of scrimmage, allowing Mack to scoot for the first down, eventually lead the Colts to a field goal from Adam Vinatieri.

In the second half, things didn’t start out much better.

On the Colts’ first drive of the second half, Brissett found Chester Rogers wide open behind the Steelers’ secondary for a big touchdown, giving the Colts a 17-3 lead.

I’m not sure who blew the coverage completely because we don’t know the call, but Mike Mitchell, Coty Sensabaugh and Hilton all likely had a hand in the mistake leading to the touchdown.

Following Rogers’ catch, both Hilton and Mitchell whiff in the open field, allowing Rogers to walk into the end zone. This was also the play that Mitchell injured his ankle, forcing him to take a cart to the locker room.

Overall, the Steelers didn’t show up in the first half, leading to 13 of the 20 missed tackles on the day. Fortunately, the Steelers were able to pull out a win in this instance, unlike the Chicago game in Week 3.

Sitting atop the AFC tied with the New England Patriots, the Steelers have to clean up these issues with missed tackles if they truly want to take the next step in the quest for Super Bowl No. 7.