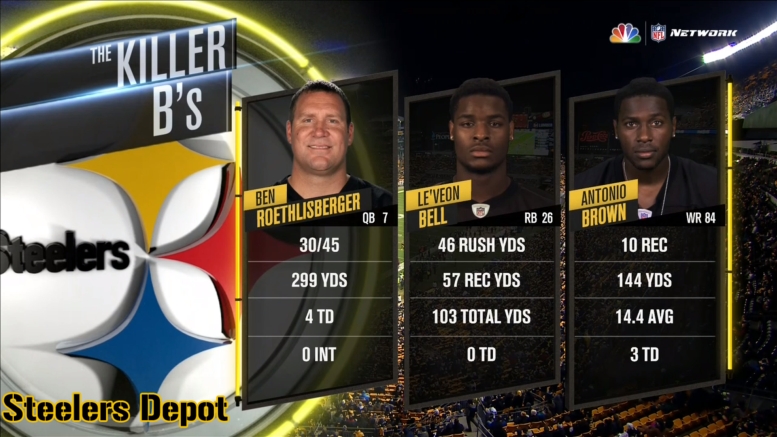 Through the first nine games of the season, the Pittsburgh Steelers were the only team with even close to a winning record that failed to score at least 30 points in a single game. The other four teams have something like six or seven wins combined between them.

While it has clearly proven not to be a prerequisite that the offense puts up a ton of points to win, it is always comforting to know that it has the potential to do so, and up until last night’s game, we had not seen that. I mean, they did put up 29 points once, but it still felt like a slog.

In their first primetime game under the Heinz Field lights, however, they lit up the Tennessee defense, commandeered by Dick LeBeau, for not just 30, but 40 points, as the game ended up being a typical lopsided Thursday affair.

And Ben Roethlisberger said he didn’t like Thursday games.

While they got off to a hot start, with Roethlisberger completing something like seven of seven passes for 71 yards, wrapping up the drive with a 41-yard touchdown strike to Antonio Brown on a jump ball thanks to a free play, they did go pretty quiet until the second half.

But they opened up the second half with three straight touchdown drives, all of them coming inside the red zone. He found Antonio Brown two more times for the wide receiver’s second career game with three receiving touchdowns, and also connected with tight end Jesse James off of play action.

On top of Roethlisberger’s four touchdown passes, easily his season-high—and with no interceptions—kicker Chris Boswell also added four field goals, including his first from 50 yards or more this season. Considering they had an extra point blocked and a field goal missed on Sunday, that’s not insignificant.

It wasn’t the most efficient night for the offense, as a matter of fact. They only averaged 5.1 yards per play, including 3.1 on the ground and 5.9 through the air. A lot of their opportunities were set up by the defense picking off Marcus Mariota four times and returning them into striking range.

But they did what they needed to do, and again, they got contributions from a number of venues, even though Brown was the focal point of the offense. JuJu Smith-Schuster and Martavis Bryant both came up with some tough catches, and Le’Veon Bell made a couple of plays as well.

The offensive line wasn’t at its best, contributing to allow Roethlisberger to be sacked three times after he had hardly gone down in recent games, though it seemed like the quarterback could have done more to escape.

But the point is, the Steelers were far from perfect. And they still showed that they can put up a lot of points. They can do this on any given day. It’s just a matter of avoiding the big mistakes and hitting on just a few key opportunities.