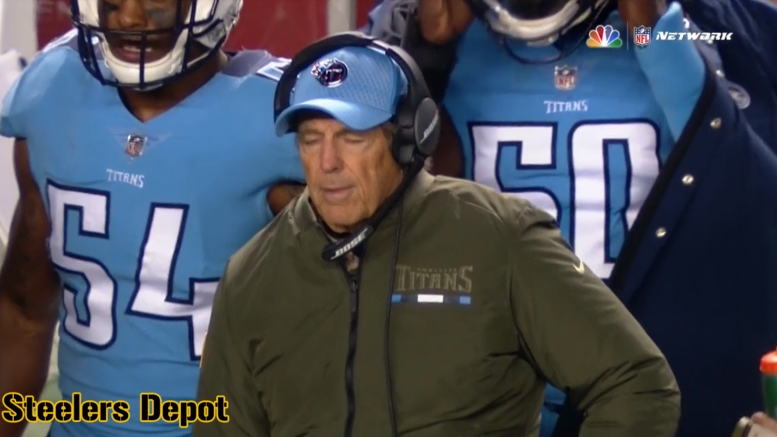 If it were not so good for the Steelers, I would no doubt feel worse about LeBeau’s rough night back in Pittsburgh. 40 points is the third-highest figure his defense has surrendered since he took his talents to Nashville. And they made his unit’s season rankings just that much worse, on top of it all.

Not that it was a complete disaster for him. And let’s also keep in mind that his unit was dealt a bad hand frequently because of Terry Robiskie’s offense. Four times Marcus Mariota was intercepted, and on three of those interceptions, the interceptor returned the pass to within field goal range.

Despite the fact that the Steelers frequently had short fields to work with, none of those particular trips actually ended up across the goal line. They only got field goals after the first three interceptions, and the final interception essentially sealed the game.

His defensive front seven was also able to get pressure on Ben Roethlisberger pretty well throughout the night, which included a season-high three sacks allowed by the Steelers. Even then, Roethlisberger actually made some plays under pressure that he has not been doing much this year.

His stunts in particular were an effective tool in his repertoire, something that he long homed in Pittsburgh during his tenure here as defensive coordinator, where, of course, he helmed some of the greatest defenses of the free agency era, and perhaps even beyond even that.

One area in which the Titans have been good this season has been against the run, and they did limit Pittsburgh to 65 yards rushing, averaging not much more than three yards per carry. And even Roethlisberger’s 299 passes yards took 45 attempts to get.

But the ultimate goal is keeping points off the board, and by the end of the game his unit allowed four balls to cross into the end zone, on Roethlisberger’s four touchdown passes. Chris Boswell also added four field goals to complete what the kids these days call a 40-burger.

LeBeau might not quite have the talent, or the rules, that he had to work with in Pittsburgh, but he does have some good players. We saw impressive rookie Adoree’ Jackson work to hold his own against the Steelers’ receiving corps. Kevin Byard leads the league in interceptions. Jurrell Casey has blossomed since LeBeau has been there, and there are others to compliment as well.

That unit helped limit the offense to just four conversions on third down on 12 opportunities, and kept them out of the end zone on four of seven trips inside the 20-yard line. Frankly, it’s hard to win games when your offense turns it over four times, and that really puts a burden on the other side.