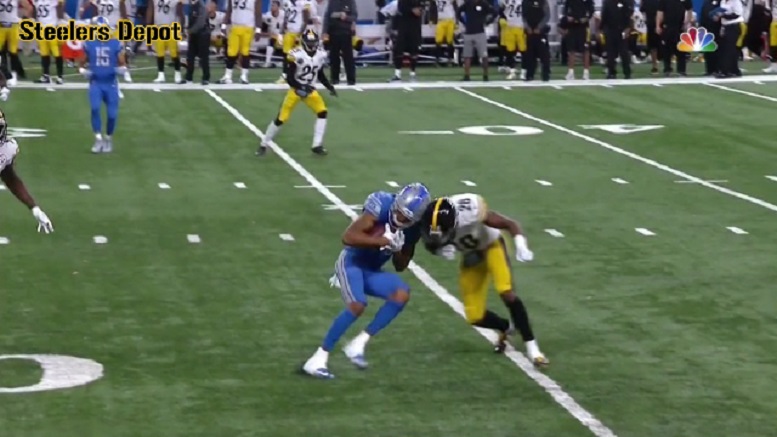 Pittsburgh Steelers safety Sean Davis is a little lighter in his wallet this week thanks to him being fined for an illegal hit in the team’s Week 8 road win over the Detroit Lions.

According to Ray Fittipaldo of the Pittsburgh Post-Gazette, Davis was fined $24,309 this week for his third quarter unnecessary roughness penalty stemming from a shot to the head of Lions wide receiver Marvin Jones.

You can see the hit by Davis on Jones below and while the safety might appeal his fine, it’s hard to imagine it will get rescinded. With that said, the fact that Davis only earns a weekly paycheck in 2017 of nearly $37,400 means that he’ll won’t have to pay the full $24,309 fine being as it exceeds 25% of his weekly pay.

This is now the second time that Davis has been fined during his young career as the Steelers second-year safety was previously fined $24,309 by the NFL for his fourth quarter hit on Kansas City Chiefs wide receiver Chris Conley during last year’s Divisional Round playoff game.

On a somewhat related note, Ian Rapoport of the NFL Network reports that neither Steelers center Maurkice Pouncey nor Lions defensive tackle A’Shawn Robinson were fined this week for their late-game rumble Sunday night. Robinson was ejected during the game’s final minutes for throwing punches as Steelers guard Ramon Foster following one of the final kneel-down plays to close out the contest. During that skirmish, Pouncey also landed an open-handed blow to the helmet of a Lions player.