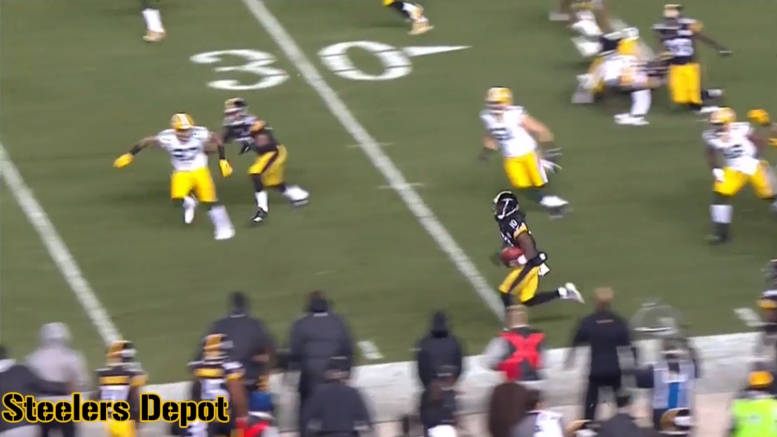 With Pittsburgh Steelers rookie wide receiver JuJu Smith-Schuster sidelined for the team’s Sunday night game against the Green Bay Packers because of a hamstring injury the team decided to let fellow wide receiver Martavis Bryant return kickoffs alongside running back Fitzgerald Toussaint, who had been promoted from the practice squad on Saturday. Bryant didn’t disappoint in that role as he returned two kickoffs for 58 yards during the game with a long of 38 yards, a season-best for the team.

On Thursday, Steelers special teams coordinator Danny Smith let it be know that we probably haven’t seen the last of Bryant returning kickoffs this season.

“I’m not sure where or when, but yes, I expect it at some point,” Smith said, according to Chris Adamski of the Pittsburgh Tribune-Review. “We threw him back there one day. He wants the ball in his hands, and I told him we can get the ball in his hands a couple times within a ballgame. We will see where it goes.”

By the sound of things, Smith didn’t guarantee that Bryant would return kickoffs Monday night against the Cincinnati Bengals so that will be one thing to look for early during that contest.

“He’s excited about it today, he’s quick to speed, he’s new at it,” Smith said of Bryant, according to Jacob Klinger of pennlive.com. “There’ll be times he’ll look like that. He’s a phenomenal athlete, he can run.

The Steelers hope to have Smith-Schuster back Monday night against the Bengals as the rookie wide receiver was able to practice fully on Thursday. With that said, Smith-Schuster has only averaged 13.8 yards per kickoff return so far this season on five total opportunities with his season-long being 25 yards.

In case you’re curious, the last time the Steelers returned a kickoff for a touchdown was in 2010 when wide receiver Antonio Brown raced 89 yards for a score to open the game against the Tennessee Titans via a reverse.