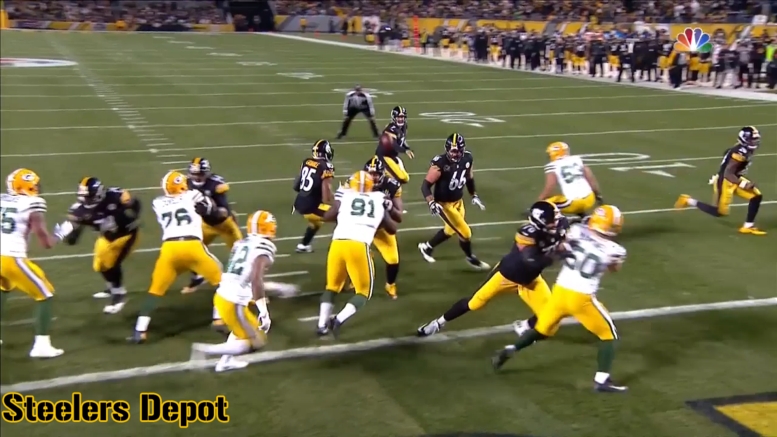 While there are many things that can be said about the Pittsburgh Steelers’ offense and the myriad issues that they’ve had—you can talk about scheme, execution, and just about everything else you can think of—they all ultimately culminated in the struggles of two particularly damaging areas of situational football: red zone offense and third-down conversions.

The Steelers have spent much of this season finding themselves among the worst offensive teams in football when it comes to extending drives on the possessions downs and in converting trips inside the 20-yard line into seven points rather than three. That wasn’t much of a problem for them on Sunday night.

In a beautiful respite of what had worryingly become the norm, Pittsburgh routinely executed at critical moments, with particular credit naturally going to quarterback Ben Roethlisberger and wide receiver Antonio Brown for the fireworks display that they were able to put together.

And it shows up in the statistics. The Steelers had 13 possession-down situations in the game, and they were successful on a whopping nine of them. While they converted eight of 13 third-down plays, one of those failed conversions was made up for on fourth down.

That particular conversion came on the final play of the team’s opening possession, which featured a number of drops that Roethlisberger was able to overcome. After Martavis Bryant was unable to get into the end zone on a jet sweep—with Brown missing a block—Roethlisberger tossed a shovel pass to Xavier Grimble on fourth down to open the night with a touchdown, and a red-zone success.

The first of three on the night, in three trips inside the red zone, including going two-for-two in goal to go situations. Bryant later was on the receiving end of a 17-yard pass from Roethlisberger that ended halfway into the end zone for a score, and Brown also had a touchdown on a beautiful fade route that was equally well-executed on both ends of the play.

The Steelers’ opening drive alone featured two third-down conversions and a fourth-down conversion. They converted twice on third and five on their subsequent drive before Roethlisberger threw an interception on the next possession down.

Their final touchdown drive also required a pair of third-down conversions before they were able to find the end zone. Their second touchdown drive featured a big 39-yard catch-and-run to Brown that occurred on third and five.

That just goes to show how important it is for offenses to be able to win on those possession downs, to live on for another play without giving up the ball. The Steelers had struggled far too much in that area this year. Hopefully this is a sign of things to come.