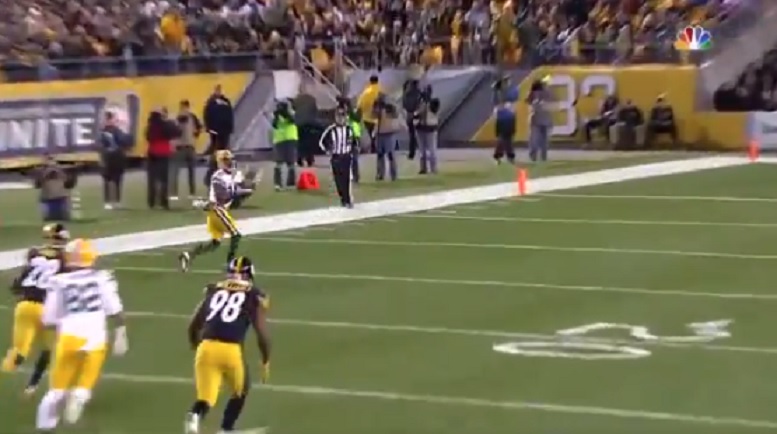 The Pittsburgh Steelers defense has played extremely well at times this season and especially when it comes to keeping the opposing offense out of the end zone. With that said, the team’s defensive unit has a trending and very cornering issue that they need to get fixed quickly and for good and that’s explosive passing plays allowed.

In the Steelers Sunday night home win over the undermanned Green Bay Packers, the team’s defense gave up four explosive passing plays during the game with three of them resulting in touchdowns. Two of those plays went for 54 and 55 yards. For the season, the Steelers defense has now allowed six passing touchdown plays longer than 50 yards and they lead the league in that dubious stat.

The Packers first explosive play touchdown came during their first offensive possession and included quarterback Brett Hundley connecting with wide receiver Randall Cobb for a 39-yard score with 4:45 left in the first quarter. On that play, which we will have a full breakdown of later in the day, Cobb was wide open thanks to a blown coverage by cornerback Artie Burns.

The Packers second explosive pass play touchdown of the game came during their second offensive possession. That play started off as a seemingly harmless screen pass from Hundley to running back Jamaal Williams but after a few poor tackling attempts, he found himself in the end zone with a 54-yard touchdown reception.

Jamaal Williams takes it to the house! ??#GBvsPIT #GoPackGo pic.twitter.com/W5idaqTwb7

The Packers third and final explosive passing play touchdown of the game came with 12:06 left in the third quarter. On that scoring play, wide receiver Davante Adams beat Steelers cornerback Coty Sensabaugh with a double move down the right side of the field. A missed tackle attempt by safety Mike Mitchell followed and Adams was ultimately in the end zone with a 55-yard touchdown reception.

???@bretthundley7 throws his third TD pass of the night, this one a 55-yard strike to @tae15adams!#GBvsPIT #GoPackGo pic.twitter.com/Jib20cCfgX

“You can’t give up chunks on defense and give yourself chances to win,” Steelers head coach Mike Tomlin said during his postgame press conference

As previously mentioned, the Steelers trend of allowing explosive passing play touchdowns isn’t new but with that said, that makes five over 50 yards allowed in the team’s last three games.

“That’s got to stop yesterday,” Tomlin would later add.

The Steelers will next play the Cincinnati Bengals in Week 13 and while their quarterback Andy Dalton did throw two touchdown passes against the Pittsburgh defense in the first meeting between the two teams several weeks ago, neither one of them was longer than 6-yards.

Ad mentioned, look for full breakdowns of a few of these plays later today.