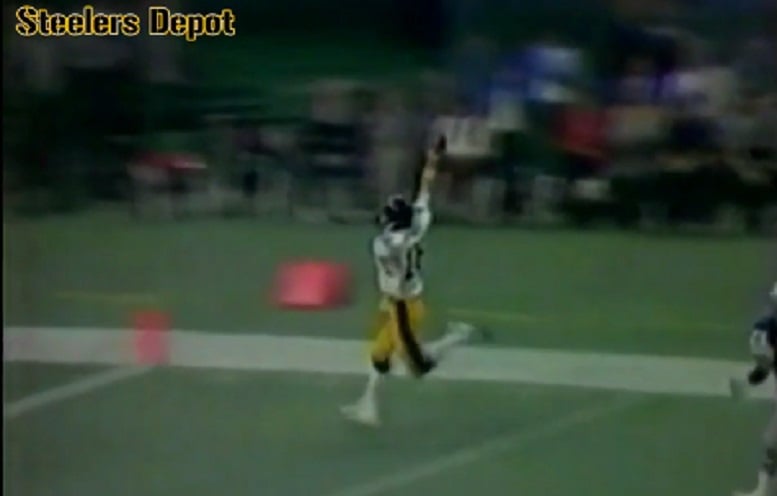 In total, I have seven plays to revisit and before we get started, I wanted to point out that up until 1981, the Steelers longest touchdown reception took place in 1961. That play included Steelers quarterback Rudy Bukich connecting with slit-end Buddy Dial for an 87-yard touchdown against the Cleveland Browns late in the fourth quarter.

As mentioned, that Bukich to Dial touchdown pass remained in the Steelers record books for just over 20 years. However, before we get to the play that ultimately set the new franchise record, there were two other touchdown pass plays that were exactly 1-yard longer than the 1961 play.

In a 1988 Week 11 home game against the Philadelphia Eagles, quarterback Bubby Brister connected with wide receiver Louis Lipps on an 89-yard touchdown pass on a 2nd down and 9 play from the Steelers 11-yard-line. While I dont have a clip to show you of that play, Brister had escaped pressure to his right while Lipps ran a hook-and-go route on that side of the field. The deep pass was caught by Lipps with two Philadelphia defenders trying to contest the throw at around the Eagles 35-yard-line and he easily waltzed into the end zone for the score.

Against the San Diego Chargers in Week 1 of the 1991 season, an 89-yard touchdown pass from Neil O’Donnell to wide receiver Dwight Stone equaled to 1988 play from Brister to Lipps. That 3rd down and 19 play included Stone leaking out to the right flat for an easy dumpoff by O’Donnell and the speedy wide receiver/running back/kick returner did the rest as he raced 89 more yards down the right sideline for a touchdown.

As mentioned earlier in the post, the 20-year-old record set by Dial and Bukich in 1961 was broken in 1981 thanks to quarterback Terry Bradshaw connecting with fellow quarterback Mark Malone for a 90-yard touchdown in a Week 10 road game against the Seattle Seahawks. Malone was asked to play wide receiver in that game due to injuries. On a 2nd and 10 play from the Steelers 10-yard-line, Bradshaw easy connected with a wide open Malone on the right side of the field at around the Steelers 35-yard-line and the quarterback-turned-wide receiver easily raced untouched the remaining 65-yards for a touchdown. It was easily a blown coverage on the play.

That Bradshaw to Malone 90-yard touchdown completion stood as the Steelers franchise record touchdown reception play for 33 years but it was tied 20 years after it happened. In a Week 14 2001 road game against the Baltimore Ravens, quarterback Kordell Stewart connected with wide receiver Bobby Shaw on a 90-yard touchdown pass with 9:20 left in the fourth quarter. That 3rd and 7 play included Stewart hitting Shaw in stride near the middle of the field at around the Steelers 35-yard-line and the wide receiver easily raced the remaining 65 yards for the touchdown.

Nearly 13 full years after Stewart connected with Shaw on a 90-yard touchdown pass, a new long touchdown pass record had already been set. However, in the fourth quarter of the Steelers Week 14 road game against the Cincinnati Bengals, wide receiver Martavis Bryant caught a 94-yard touchdown pass from quarterback Ben Roethlisberger on a 1st and 10 play and that score effectively became the second-longest touchdown pass in the history of the franchise at the time. Bryant had easily raced by the Bengals cornerback down the right side of the field and Roethlisberger hit him in stride almost near midfield. Bryant easily ran the remaining 50 or so yards untouched for the touchdown.

Three years prior to Bryant scoring from 94-yards out in Cincinnati and almost 10 years after Shaw and Stewart tied the franchise record set by Bradshaw and Malone, wide receiver Mike Wallace become the franchise leader via a pass from Roethlisberger in a 2011 Week 7 road game against the Arizona Cardinals. Wallace, just as Bryant would eventually do three years later, easily raced past the defending cornerback and down the right side of the field and Roethlisberger’s deep pass connected with the wide receiver at around the Steelers 40-yard-line. The speedy Wallace then outraced two Cardinal defensive backs to the end zone for a 95-yard touchdown reception.

This past Sunday in Detroit, Smith-Schuster finally broke Wallace’s six-year-old franchise record thanks to him scoring from 97-yards out in the third quarter on a 3rd and 9 play. Roethlisberger hit the rookie wide receiver in stride in the middle of the field at about the Steelers 30-yard-line and the USC product weaved his way to the end zone with three lions defenders in pursuit of him. The play was sort of reminiscent of the 2001 90-yard touchdown pass from Stewart to Shaw.