The Pittsburgh Steelers will play their Week 12 game at home Sunday night against the Green Bay Packers and a win will result in them remaining the top seed in the AFC for yet another week. There are quite a few other entertaining games taking place on Sunday and Monday so with that, here is your fan rooting interest guide for Week 12 in addition to the AFC seeding picture entering today’s games.

Do you believe in miracles? The 4-6 Dolphins will probably need one Sunday afternoon on the road against the 8-2 Patriots. The Dolphins will start Matt Moore at quarterback against a Patriots defense that has certainly turned things around the last several weeks and included them holding the Oakland Raiders to just 8 points a week ago. The Patriots offense will be without the services of wide receiver Chris Hogan on Sunday and potentially even tight end Martellus Bennett as well. If it’s any consolation, both of the Patriots losses this season have come art home. If you are a Steelers fan, you’re hoping for huge upset Sunday in Foxborough. Pray hard.

If I would have told you in late August that the Jaguars would be 7-3 and 4.5-point road favorites over the Cardinals come Week 12 of the regular season you probably would have laughed uncontrollably at me. Well, here we are in Week 12 and what I just typed is true. The Jaguars own head-to-head tiebreakers over the Steelers thanks to them beating Pittsburgh back in Week 5 so in short, the Steelers could use a little breathing room in the form of another Jacksonville loss. Can the Cardinals saddle them with one Sunday afternoon? Keep your fingers crossed. Man, that Jaguars defense is really impressive.

In case you haven’t noticed, the Ravens playoff hopes are still very much alive entering their Week 12 home Monday night game against the Texans. Baltimore is currently the sixth seed in the AFC and that means they would make the playoffs as a Wild Card team if the season ended today. While the Ravens offense has struggled so far this season their defense is playing very well. That unit has already recorded three shutouts this season and will face a somewhat struggling and inconsistent Texans offense Monday night that is now led by quarterback Tom Savage. A Steelers win Sunday night coupled with a Ravens loss Monday night would move Pittsburgh one step closer to clinching the AFC North crown. 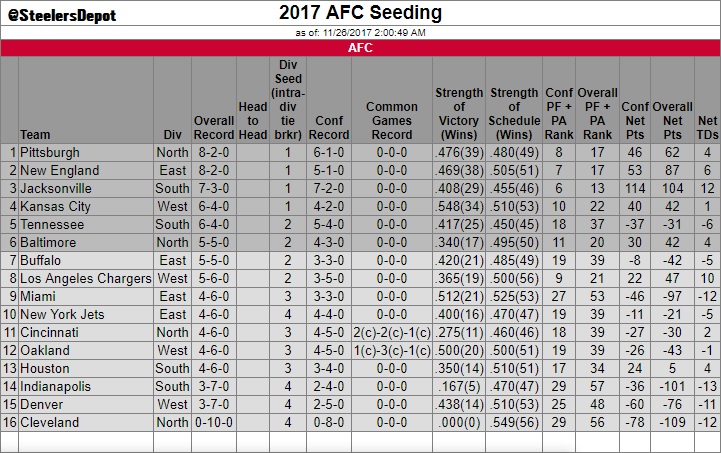