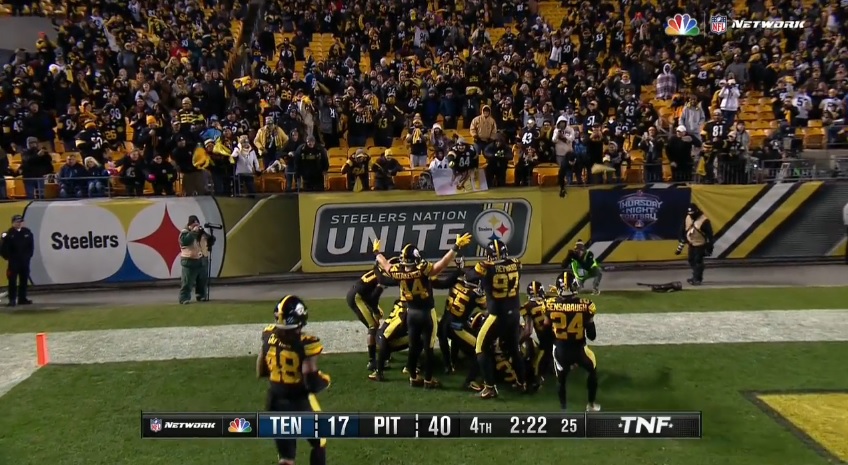 The Pittsburgh Steelers’ defense is certainly in a much better place now than it has been in years. Glance over the numbers and it’s easy to come away impressed. But talk to the players in the locker room and they paint a different picture. One that leaves room for improvement.

“We made a lot of good plays but I felt like we left them off the hook a lot,” cornerback Coty Sensabaugh said via Steelers.com. “We missed some tackles we normally make. I know as far as the secondary, we could sharpen up our coverage. A little bit of communication here and there. Just keep working everyday.”

That was stamped by the defense giving up a 75 yard touchdown on the first play of the second half. It’s the third 60+ yard touchdown they’ve allowed over the last two weeks, something that hasn’t happened since 1968.

As players and Mike Tomlin talked about, at the least, the defense has to stop a really good play from being a great one.

“We’re not going to be a dominant group until we minimize big plays and we tackle better,” Tomlin said in speaking with reporters today. “You’re going to give up big plays from time to time but we missed some tackles on those big plays. To be quite honest with you, we gotta get those plays on the ground. We get those plays on the ground, we have the opportunity to hold those groups to field goals. And that’s often times the difference of not only being dominant and playing dominant football but also winning games.”

Thursday was a tidal wave. Five sacks, four interceptions, the first time a Steelers’ defense has done so since 1984, only two years after sacks became an official stat. If they can have even a fraction of that going forward, this defense is poised to take the next step.