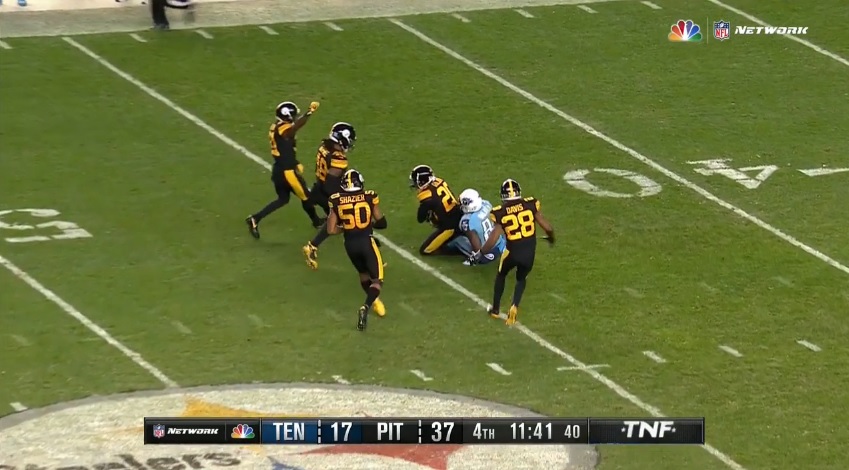 It hasn’t been perfect for the Pittsburgh Steelers’ defense. Missed tackles, communication breakdowns and some big plays allowed. But end of the day, they’re judged by one stat – points allowed. And man, this defense has excelled in that area.

For the year, they’ve allowed just 16.5 points per game, second best in the NFL. Over the last five, they haven’t given up more than 17 in any game, the first time they’ve done that since 2010 and one of four units to do so in 2017. And really, it’s a seven game streak considering 13 of the Jacksonville Jaguars’ points were courtesy of Ben Roethlisberger.

Use that sorta skewed stat and they haven’t had this points allowed streak since 2001. Before Tomlin, before Ben, before the Super Bowl runs in the mid-2000s. Heck, Kevin Colbert had just gotten his seat warm.

Thursday, containing a Titans’ offense that was so complex, so tough to prepare for wasn’t lost on the players.

“This is a short week,” Stephon Tuitt said after the win. “We didn’t have much time to prepare for a team like the Tennessee Titans. They run so much stuff out of their formations. For us to come here and beat them at our place in front of our fans, that means a lot to us. At the end of the day, our fans supported us and I want to say thank you to our fans. Also at the end of the day, our teammates did a great job on a short week to battle and give it everything they have.”

It’s a defense that ranks top five in several key categories. Points allowed, sacks (2nd), interceptions (tied 2nd), and their red zone defense is getting close to cracking that mark, jumping from near bottom in the league to top ten.

Again, not perfect. But in this era, it’s hard to be. The Steelers’ defense is really good and they haven’t touched their potential. A scary thought for opposing offenses.

“We try to be perfectionist,”Ryan Shazier told reporters. “We’re kinda mad at the 17 points we gave up.”

Best of all, it’s a varied defense. They don’t win in just one way. Pressure gets generated from all 11 guys. A dominant defensive line, outside linebackers who have flashed, an All-Pro ILB in Shazier and another in Vince Williams who is second on the team in sacks.

In coverage, they’ve blended a mix of man and zone. Cover 2 has been effective, like on Coty Sensabaugh’s INT Thursday night, and we went in-depth on how often they used man when it’s third and medium. There’s vets, rookies, everyone inbetween. And as corny as it sounds, a family who takes pride in the success of everyone else. It’s why they have a “family photo” after every interception, jumping on the fun of the league expanding celebrations to include teammates.