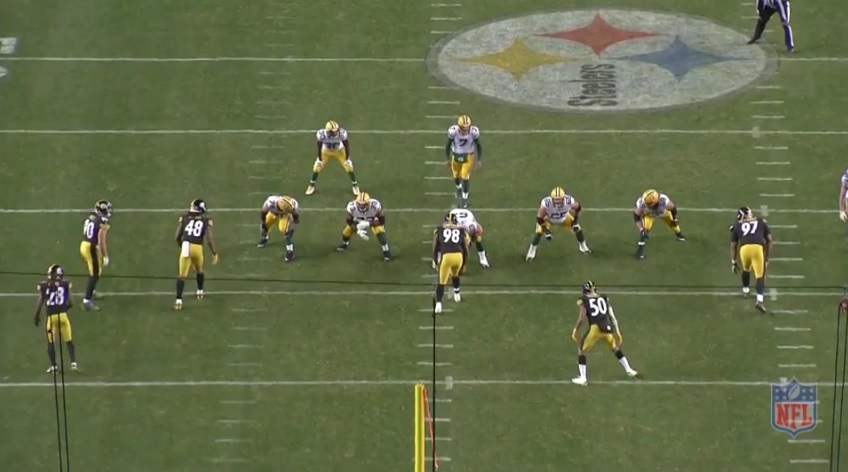 There is one element of the Dick LeBeau defense we haven’t seen under Keith Butler. Perhaps it was appropriate that Butler finally used it against the Green Bay Packers and Dom Capers, who runs an amoeba sub-package. That’s what Butler used Sunday night, a 1-4-6 dime defense with just one defensive linemen.

He used it four times against Green Bay. Three of the four plays were successful and the other a fourth down conversion. A brief look at it.

All four times, Stephon Tuitt was subbed off for William Gay, who came on as the dime defender. Two examples. Stuff you’d expect from this front. A chaotic front with everyone standing up and Cam Heyward moved around the line of scrimmage. In the first photo, he’s the ROLB and in the second, standing over center. 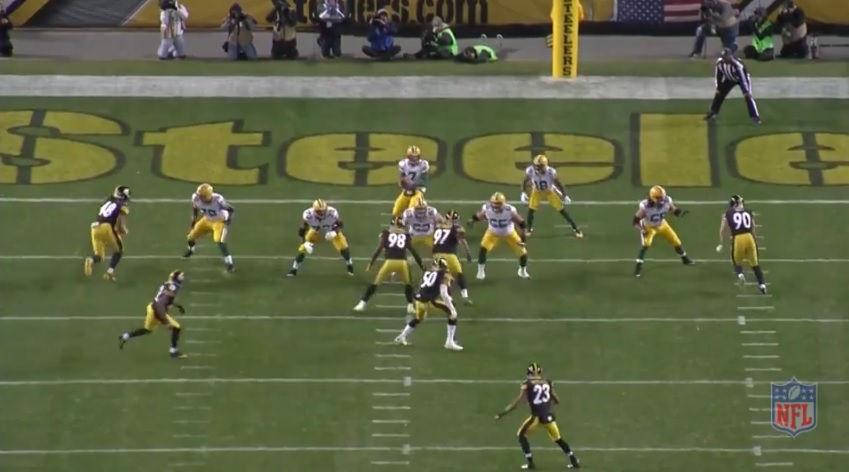 Normally when the Steelers go dime, it’s a 2-3-6 grouping with Williams coming off for Gay. That wasn’t always the case Sunday and it’s worth wondering if that’s something we’ll see down the road or if it was gameplan specific for the Packers game.

There is evidence to support the latter. All four amoeba looks came against 4 WR sets, often with Randall Cobb serving as the “running back.” But the Steelers were still able to generate pressure, Cam Heyward had a sack on one of the four plays, and Brett Hundley completed two passes for only ten yards. Maybe that success will inspire Butler to keep the look around, even against more traditional 11 personnel.

Or maybe he does something totally new. Just speaking out loud, but a 1-3-7 look with both Gay and Cam Sutton on the field, once Sutton has earned the confidence of the coaching staff. Maximize athleticism on the field for third and long and not worry about getting a linebacker on a slot receiver. It wouldn’t be the worst idea against a team like the New England Patriots, who spread the field horizontally as well as any team in the league.

No matter what, it was cool to see the amoeba defense brought back. And it was good preparation by Butler to have an answer for the Packers’ four receiver set, which the defense went out and shut down almost flawlessly.