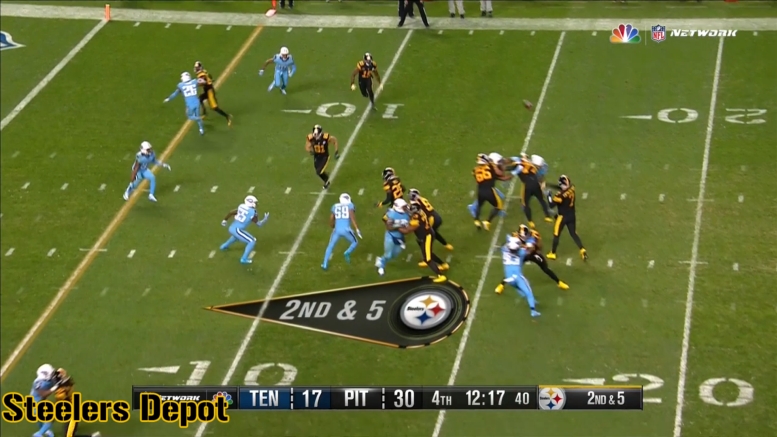 I think—maybe I’m wrong, but I think—that Pittsburgh Steelers quarterback Ben Roethlisberger would admit that he has not been having his best season, overall, this year. But again, like I said, I could be wrong. He did previously say that he felt he was playing as well as ever ‘between the ears’ in terms of decision-making.

But anyway, the point is that he just had his best game of the year, and I don’t think there are going to be any post-game comments that can be painted as cryptic enough to create a controversy, as when he responded to a reporter’s question by insincerely suggesting, “maybe I don’t have it anymore”.

That was following a game in which he threw a career-worst five interceptions, which, by the way, accounts for half of his 10 interceptions this year. Now he just had his best night, throwing four touchdowns—the first time he has thrown more than two in a game this year—without turning the ball over once.

More importantly, he looked like he still has it. He made some excellent throws, he made some excellent decisions, and he made some plays as well. I thought he took a couple of unnecessary sacks that will merely serve to make his season-ending total look worse than it really is, but that’s about the only negative I can say about his performance.

Of course, it helps to have somebody like Antonio Brown to throw to, who had three of those four touchdowns, doubling his total on the year. And Roethlisberger’s touchdown pass total jumped up 25 percent, from 12 to 16.

He completed two thirds of his passes, 30 of 45, and that was with a few drops mixed in, throwing for 299 yards. That isn’t the model of efficiency—actually working out to under 6.4 yards per pass attempt—but the Steelers used the screen game as an extension of the running game.

And, honestly, he often didn’t get a lot of help from his playmakers, if you can call Jesse James one of those. He had three or four catches out into the flat where he only picked up a few yards because he cannot make a tackler miss.

What is most important at the end of the day, aside from the end result of the game, is looking at the throws made, though, and frankly, he made a lot of throws here that he didn’t earlier this year, even as recently as Sunday.

He hit a great hole shot to Brown in this game that he missed to the other sideline in Indianapolis. He and Martavis Bryant landed the back-shoulder throw before the receiver even turned around. He threw JuJu Smith-Schuster open with space to run.

If this is a sign of things to come, then the Steelers are going to be a very, very dangerous team. If he is hitting these throws again with any semblance of regularity, then they are capable of beating any team at any time in any place. Period.