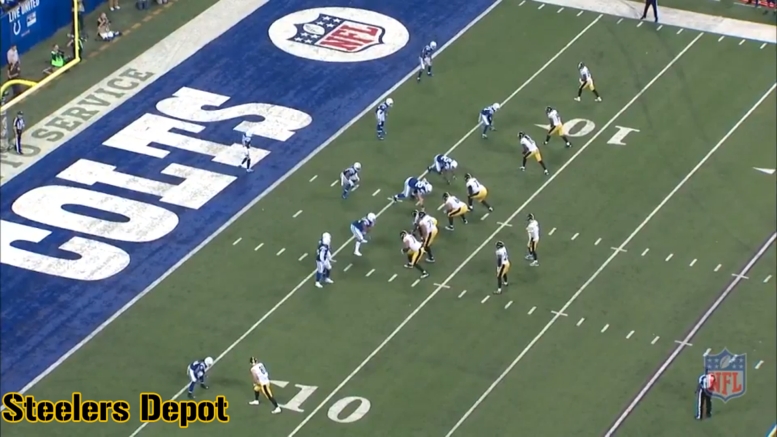 One offensive aspect that I have noticed the Pittsburgh Steelers turning to a bit over the course of the past two games—admittedly more so in the road game against the Colts than on Sunday at home facing the Titans—have been to make usage of loading up wide receivers on one side of the field, also known as the trips formation.

While this is a statistic that is somewhat difficult to track after the fact, given that I have been charting the offense all year—for several years now—I would like to assume that it would have occurred to me that this was a frequent formation. But to the best of my knowledge it has been scarcely used at best.

I did find its usage both notable and noticeable, however, in the game against the Colts. It was used five times during the game, by my count, and in each instances, the three receivers used were Antonio Brown, JuJu Smith-Schuster, and Martavis Bryant.

In general, the package went well, even if, technically, only one of the five plays officially count as a completion. That was a 20-yard reception by Smith-Schuster on third and 12. Bryant’s two-point conversion also came out of the trips formation, and Brown drew a pass interference penalty. Another was simply an incompletion, while a fifth play was aborted due to a fumble.

To the best of my observational abilities, however, the Steelers did not continue to make great use of the trips formation in their next game against the Titans. I identify two plays in my charting notes in which they utilized this set, and in this case the third receiver was not Bryant, but Eli Rogers.

Perhaps the reason that they did not make greater use of this set during the Titans game, in spite of the fact that they nearly exclusively ran out of the 11 personnel package, is that it did not work out this time around. On the two pass attempts, neither resulted in a completion, one a Le’Veon Bell dropped pass. The other incompletion was a deep throw to Smith-Schuster.

Ultimately, I do think this is a grouping that the Steelers can and should run more, and I would expect them to be able to run it effectively. Having three receivers together such as Brown, Bryant, and Smith-Schuster, each respected by now to some degree, and each offering a varying skill set, could put the stress on the defense on whichever side they line up, and potentially open something up on the opposite side.