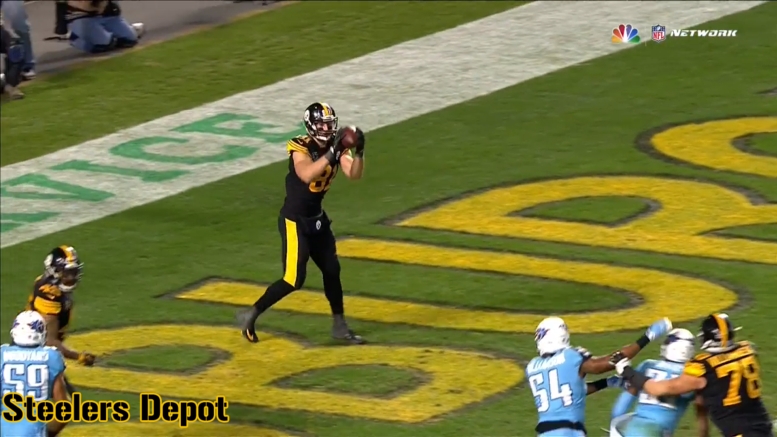 I can’t help but believe that there are more people feeling less horrible about the Pittsburgh Steelers’ win last night than they usually do. After all, they got past the mystical 30-point mark for the first time this year—which admittedly even I have written about, and the defense recorded a ton of splash plays.

But there were failed red-zone trips, the third-down offense was ugly early, the defensed missed several tackles, and they allowed a couple of big passing plays, including a 75-yard touchdown pass. All of things combined guarantee that they will lose to the New England Patriots in the AFC Championship game, if I understand things correctly.

But all kidding aside, look, the Steelers are 8-2 right now. Do you know the last time they were 8-2 through 10 games in a season? For starters, it’s never happened before under Mike Tomlin, and he’s been here for 11 years already. This was the first time that he has been able to accomplish that feat.

I actually almost wish that it was less obvious when last the Steelers had a record this good, because almost everybody knows that they went 15-1 during the 2004 season, and of course you can’t finish 15-1 if you don’t at least start 9-1.

So let’s cast the obvious aside for now. The last time before the almost-undefeated season that the Steelers had done this well through this point of the season was in 2001, during a frankly surprising season that saw a team quarterbacked by Kordell Stewart go 13-3 overall.

They, too, were 8-2 through 10 games, and in fact made it all the way to 12-2 before they lost again, so just keep that in mind as we go on and tally off wins, that for a while now the answer to the question, ‘when was the last time they posted a record this good through this number of games’, aside from 2004, is going to be 2001.

At least for the next couple of days, Pittsburgh is the only team in the conference that has eight wins. In fact, they are one of only two teams with eight wins, the other one being the 8-1 Eagles. They have already assured another year with no losing season, which has been every year of Ben Roethlisberger’s career. That’s not bad.

The Steelers will have some extra time off before they play the first of only two remaining teams on their schedule who currently have a winning record, and they might not even have one by the time they play. the Packers just won their first game with Brett Hundley to get to 5-4, but they could lose to the Ravens. If they win, they’ll be 6-4, but I don’t think anybody here will complain about Baltimore losing.