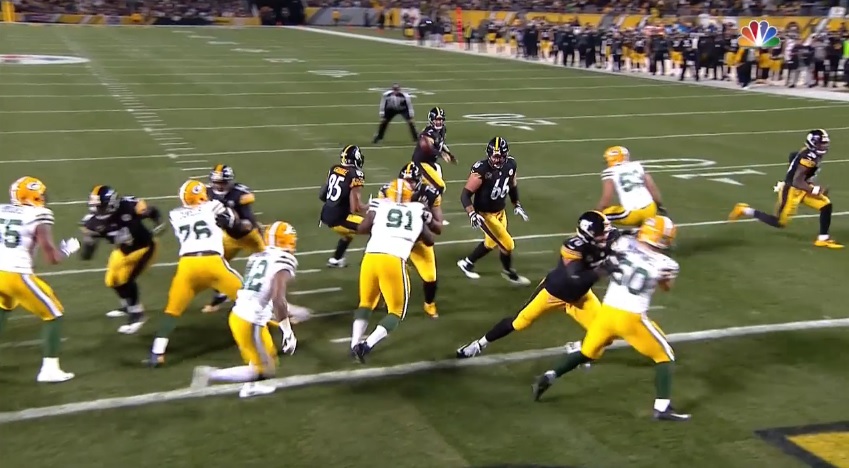 Weird game. Another one where I lost five years off my life.

– The 28 points allowed by the Pittsburgh Steelers’ defense are the most they’ve given up since Week 10 of last year, the gut-wrenching 35-30 loss to the Dallas Cowboys. Impressive streak.

– Le’Veon Bell set a career high and a Steelers’ record with 12 receptions by a running back. Since 2004, only one other Steeler has caught 12 in a game. Antonio Brown, who has done it six times.

It’s the most of Bell’s college/NFL career too. Never had more than eight at Michigan State,

Bell is the first NFL running back to catch 12 in a game since Buck Allen in 2015.

– Antonio Brown has posted 10+ receptions, 125+ yards, and 2+ TDs in back-to-back games. Brown is the first Steeler to do it in franchise history.

He’s the first receiver to do that since Drew Bennett on December 13th-19th, 2004. Bennett, Brown, and Cris Carter in 1995 are the only three in NFL history to have consecutive games like that.

– A stat of the weird that isn’t so fun. The Steelers have allowed five TD passes of 50+ yards over the last three weeks. It’s the first time they’ve done it in NFL history.

They’ve allowed six such TDs this season. That hasn’t happened since 1968, so before Chuck Noll. The most they’ve given up in a year is nine, done in 1966.

– Chris Boswell’s 53 yarder was two yards longer than his NFL career long. It’s the longest field goal he’s hit since his senior year at Rice, a 56 yarder in Week Two to beat Kansas.

– Cam Heyward is up to 9 sacks this season. That’s a career high. He’s the first Steeler to rack up at least nine sacks in a season since James Harrison in 2011 and the first DL to do it since Keith Willis in 1986. Willis is the only other DL to do it in recorded history (since 1982).

Heyward has also moved into 10th place on the Steelers’ all-time sack list.

– Ben Roethlisberger’s 25 yards rushing is the most he’s had since 2013. He did it against Baltimore.

– And finally, T.J. Watt is up to five sacks this season. Most by a Steelers’ rookie since Kendrell Bell’s nine way back in 2001.